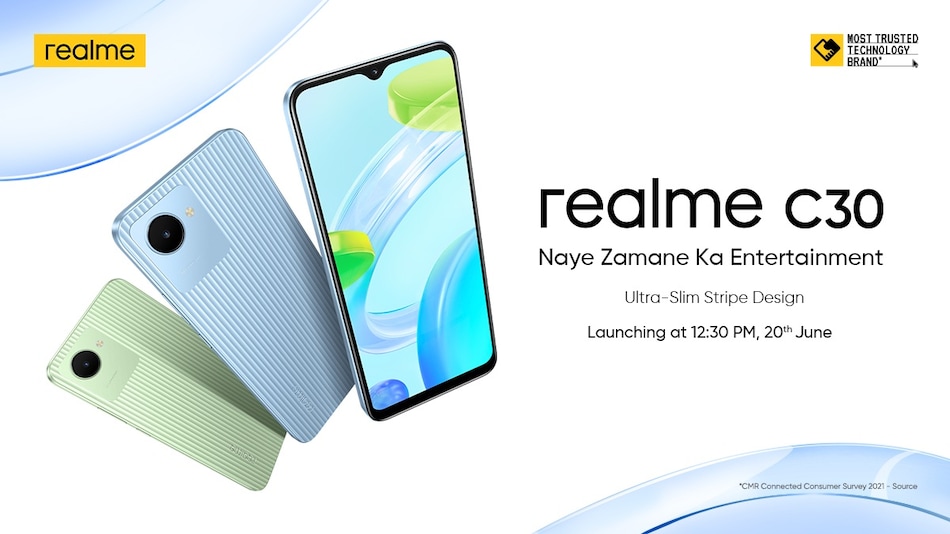 Realme has announced the arrival of the Realme C30 in India. This entry-level handset is set to launch on June 20 at 12:30pm. The Shenzhen company has also revealed some of the key specifications of this upcoming handset. The Realme C30 is powered by a Unisoc T612 SoC and packs a 5,000mAh battery. It sports an ultra-slim design with a lightweight build. Furthermore, the revealed images confirm that this handset will sport a waterdrop-style notch, and come in blue and green colours.

Realme confirmed the release date for the Realme C30 on Twitter; it will launch on June 20 at 12:30pm. A microsite on Flipkart has also surfaced that confirms some of the key features of this handset. The Realme C30 is fitted with an octa-core Unisoc T612 SoC that is claimed to have an AnTuTu benchmark score of 176,932 points. It packs a 5,000mAh battery said to provide all-day battery backup. The smartphone weighs 182g and has a thickness of 8.5mm. It sports a stylish Vertical Stripe design on the rear panel.

Recent rumours have suggested that the Realme C30 could be priced around the Rs. 7,000 mark. It will have to compete with the other smartphones in the same price segment like the Poco C31 and Infinix Smart 6. The handset has also been tipped to sport a 6.6-inch full-HD+ display. There could be a 13-megapixel primary camera and a 5-megapixel selfie snapper as well. The battery is also expected to support 10W fast charging. It is most likely to boot Android Go Edition out of the box.

In terms of wireless connectivity, it may support 2.4GHz Wi-Fi and Bluetooth. This smartphone is expected to offer 2GB RAM + 32GB storage and 3GB RAM + 32GB storage configuration options at launch. Previously leaked renders also suggest that the Realme C30 will feature a Micro-USB port and a 3.5mm audio jack.