Realme C3 on Open Sale Till February 21 on Flipkart, Realme.com 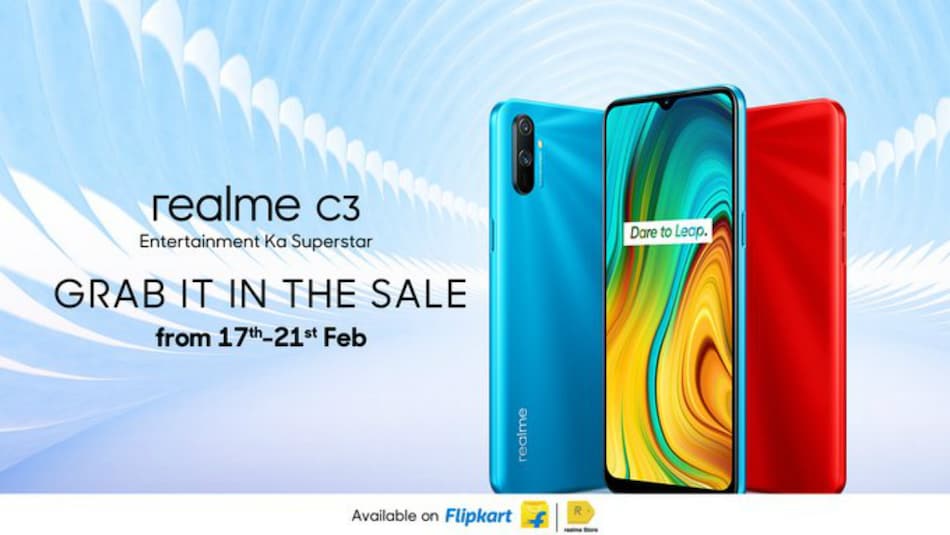 Realme C3 was launched in India earlier this month

Realme C3 is now available in a limited period open sale in India. The phone is up for grabs 24x7 till February 21 on Flipkart and Realme.com. The Realme C3 was launched in India earlier this month, and its first sale was held last week. In its first sale, the phone was made available for the whole day, and now the phone is listed in an open sale manner just two weeks after its initial launch. Realme India CEO Madhav Sheth claims that the open sale has been announced to ‘fulfil the massive demand of the Realme C3'.

The Realme C3 is priced in India at Rs. 6,999 for the 3GB RAM + 32GB storage option and Rs. 7,999 for the 4GB RAM + 64GB storage option. As mentioned, it is available in an open sale manner on Flipkart and Realme.com both. This open sale will be held till February 21 only, after which it will go back to the flash sale model. The phone is listed on the two sites in Frozen Blue and Blazing Red colour options. Sheth announced the open sale on his Twitter account.

Realme.com offers include Jio benefits worth Rs. 7,550, and MobiKwik cashback of up to Rs. 500. In comparison, Flipkart has listed bank cashbacks and no-cost EMI options.

The dual rear camera setup of the Realme C3 includes a 12-megapixel main sensor with an f/1.8 lens and a 2-megapixel secondary sensor with an f/2.4 lens. The smartphone also has a 5-megapixel selfie camera that supports features such as HDR and AI Beautification.Connectivity options include 4G VoLTE, Wi-Fi, Bluetooth v5, GPS/ A-GPS, Micro-USB, and a 3.5mm headphone jack. The Realme C3 measures 164.4x75.0x8.95mm.

iPhone 9 aka iPhone SE 2 May Face Delay Due to Coronavirus: Report
Amazon Under Fire From UK Union Over Warehouse Safety