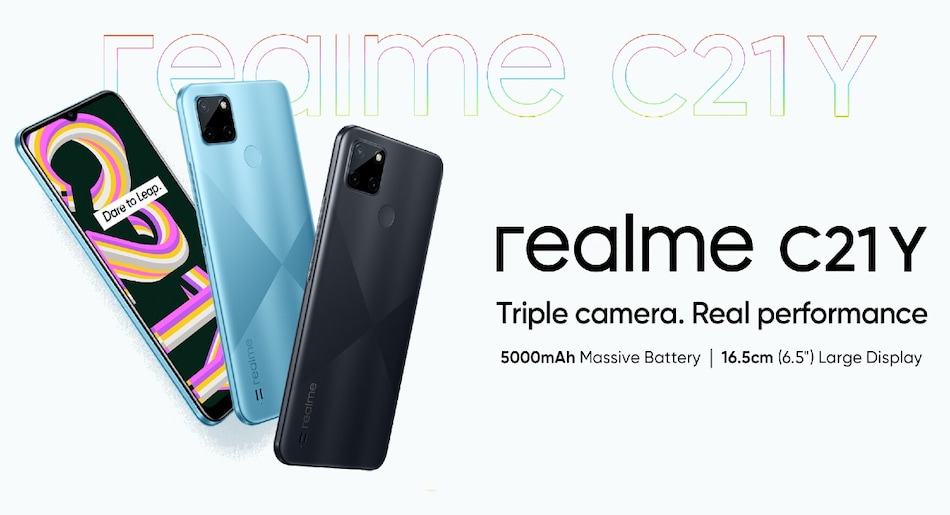 Realme C21Y comes as an affordable offering from the company

Realme C21Y is set to launch in India today, August 23. The Realme phone was initially unveiled in Vietnam last month as an affordable model in the company's C series. Realme C21Y carries triple rear cameras and a 20:9 display. It also features a waterdrop-style display notch. Other highlights of the Realme C21Y include up to 4GB of RAM, octa-core SoC, and a 5,000mAh battery with reverse charging support. The smartphone also comes in two distinct colour options to choose from.

The Realme C21Y launch will take place today at 12:30pm IST. Shortly after the formal announcement, the smartphone is expected to go on sale through the Realme.com website as well as other major online and offline retailers in the country.

The new Realme C21Y was launched in Vietnam in Black Caro and Caramel Green colours. However, its Indian variant will have Cross Black and Cross Blue shades.

The dual-SIM (Nano) Realme C21Y runs on Android 10 with Realme UI on top. It features a 6.5-inch HD+ (720x1,600 pixels) display with a 20:9 aspect ratio. The phone is powered by an octa-core Unisoc T610 SoC, coupled with Mali-G52 GPU and up to 4GB of RAM. For photos and videos, you're getting a triple rear camera setup that houses a 13-megapixel primary sensor, along with a 2-megapixel monochrome sensor and a 2-megapixel macro shooter. There is also a 5-megapixel selfie camera sensor at the front.

In terms of storage, Realme C21Y has up to 64GB of onboard storage support. The smartphone has a usual set of connectivity options that include 4G LTE, Wi-Fi, and a Micro-USB port. There is also a 3.5mm headphone jack. Further, the phone carries a fingerprint sensor on the back.

Realme C21Y packs a 5,000mAh battery that is claimed to deliver an all-day usage on a single charge and has reverse wired charging support.