Flipkart has listed Realme C20, Realme C21, and Realme C25 on its site to suggest their online availability shortly after the official launch. 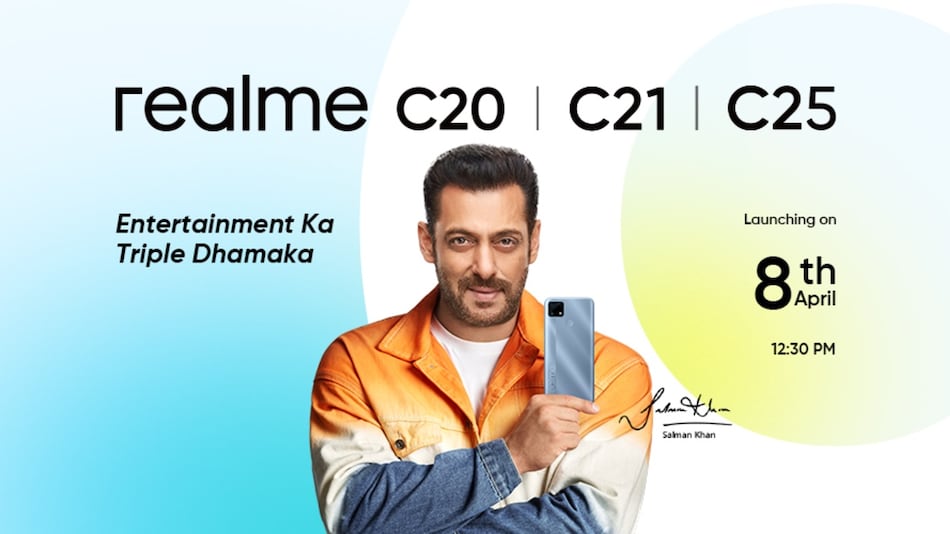 The Realme C20, Realme C21, and Realme C25 India launch will be held on April 8 at 12:30pm. Realme has sent a media invite for the launch and also posted the details on its social media accounts. Flipkart has also listed all three phones on its site, suggesting their online availability soon after the launch.

The dual-SIM (Nano) Realme C20 runs on Realme UI based on Android 10 and features a 6.5-inch HD+ (720x1,600 pixels) IPS display. It is powered by an octa-core MediaTek Helio G35 SoC, along with 2GB of RAM. The phone has a single 8-megapixel camera sensor at the back, along with an LED flash, and a 5-megapixel selfie camera sensor at the front. It comes with 32GB of onboard storage that supports expansion through a microSD card (up to 256GB). The Realme C20 packs a 5,000mAh battery and comes with a Micro-USB port.

Just like the Realme C20, the dual-SIM (Nano) Realme C21 also runs on Android 10-based Realme UI and features a 6.5-inch HD+ (720x1,600 pixels) display. The phone is powered by the MediaTek Helio G35 SoC, along with 3GB of RAM. It comes with a triple rear camera setup that has a 13-megapixel primary sensor, a 2-megapixel macro shooter, and a 2-megapixel monochrome sensor. There is also a 5-megapixel selfie camera sensor at the front. The Realme C21 has 32GB of onboard storage with microSD card support and carries a rear-mounted fingerprint sensor. There is also a 5,000mAh battery with 10W charging support.

The dual-SIM (Nano) Realme C25 runs on Android 11 with Realme UI 2.0 on top and features a 6.5-inch HD+ (720x1,600 pixels) display. The phone is powered by an octa-core MediaTek Helio G70 SoC, along with 4GB of RAM. It has a triple rear camera setup with a 48-megapixel primary sensor, a 2-megapixel monochrome sensor, and a 2-megapixel macro shooter. There is also an 8-megapixel selfie camera sensor. The Realme C25 comes with up to 128GB of internal storage and packs a 6,000mAh battery with 18W fast charging support.

PUBG Lite Is Going Dark, to End Service and Player Support by May 29