Realme C12 and Realme C15 will be launched in India through a virtual event that is scheduled for 12:30pm on August 18. 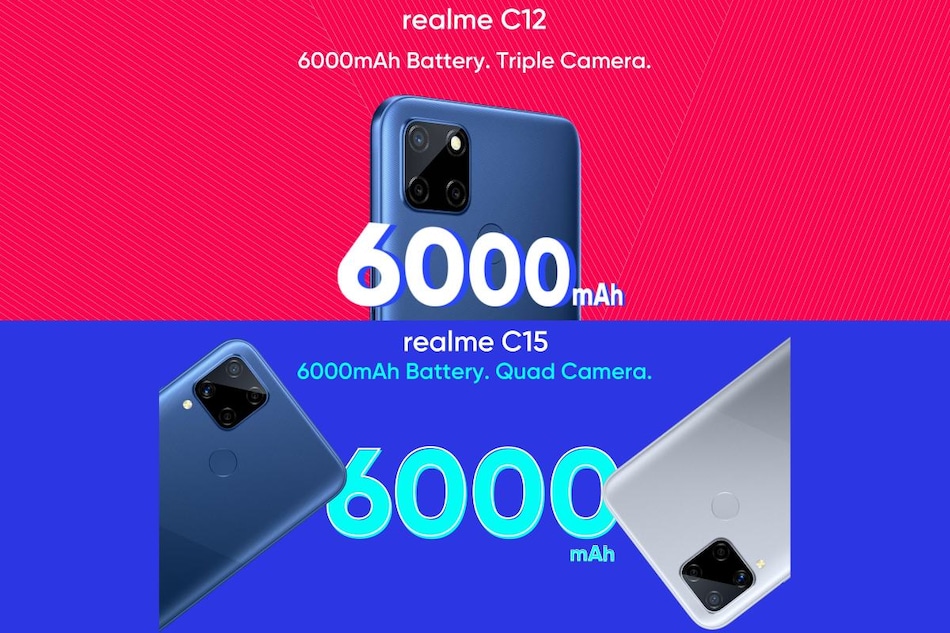 Realme C12 and Realme C15 are set to launch in India on August 18, the company revealed through teasers featured on its website. Both the devices are teased to come with a 6,000mAh battery. The Realme C12 also surfaced on benchmark site Geekbench and the certification portal of Bureau of Indian Standards (BIS) earlier this month. The Realme C15, on the other hand, was already available in Indonesia. The media invite sent by Realme on Wednesday shows that the Realme C12 and Realme C15 will both launch in India through a virtual event that will take place at 12:30pm on the date.

The invite also confirms the existence of a 6,000mAh battery on the new smartphones. Additionally, Realme has created a couple of microsites to give a glimpse at both the Realme C12 and Realme C15.

Realme C12 price in India will be announced at the virtual event. However, the phone is expected to come at a price slightly higher than the Realme C11 that was launched in the country last month at Rs. 7,499 for the single 2GB RAM + 32GB storage configuration.

As per the teasers available on the Realme website, the Realme C12 is expected to come with a triple rear camera setup, paired with an LED flash. The phone also appears to have a rear-mounted fingerprint sensor. Further, it includes the 6,000mAh battery that is teased by the company to deliver 57 days of standby time, 46 hours of voice calling, or 60 hours of music playback on a single charge.

Looking at the details that recently surfaced on Geekbench, the Realme C12 could come with at least 3GB RAM and the octa-core MediaTek MT6765G (Helio P35) SoC, running Android 10.

Realme also brought some teasers of the Realme C15 that show off its quad rear camera setup and 6,000mAh battery with 18W Quick Charge support. Rest of its specifications are likely to be identical to those of its Indonesian version.

The Indonesia version of the Realme C15 runs on Android 10 with Realme UI and has a 6.5-inch HD+ (720x1,600 pixels) display. The phone is powered by an octa-core MediaTek Helio G35 SoC, paired with up to 4GB RAM and up to 128GB of onboard storage. It also comes with microSD card support for storage expansion.

Realme has provided a Micro-USB port for charging on the Indonesian version of the Realme C15. Besides, the phone packs a 6,000mAh battery, along with 18W fast charging support.