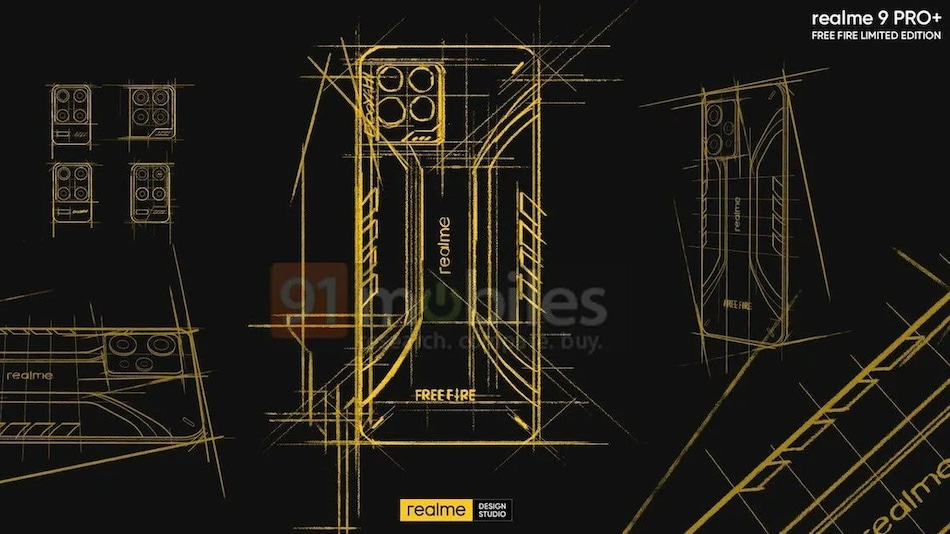 Realme had announced in February that it will soon be releasing a Realme 9 Pro+ Free Fire Edition model. At the time, it did not reveal any information regarding the upcoming limited edition handset. Now, an exclusive report shows Realme 9 Pro+ Free Fire Edition's design details through a sketch. The image suggests that this smartphone will sport Free Fire branding on the rear panel with, accents on the side. It is expected to also come with an exclusive Free Fire theme for the Realme UI.

The report from 91Mobiles shared an alleged Realme 9 Pro+ Free Fire Edition design sketch by notable tipster Steve Hemmerstoffer (@OnLeaks). Its rear panel has been redesigned for this edition and sports Free Fire branding with side accents. It has a rectangular camera module on the top left corner, housing a triple camera setup as well as the LED flash. Next to the camera module, the text 'Booyah!' has been reportedly engraved, which is a popular phrase from the game. In addition, the tipster has provided additional camera module designs that Realme could use for the final model. Notably, Garena Free Fire was recently banned in India. However, Garena Free Fire MAX is currently available on Google Play.

The Realm 9 Pro+ Free Fire Edition is expected to feature the same specifications as the original model that was released in February. It sports a 6.4-inch AMOLED display that is protected by Corning Gorilla Glass 5. You have the option to select between 60Hz and 90Hz refresh rates. Under the hood, it houses a MediaTek Dimensity 920 SoC. The smartphone runs on the Android 12, with Realme UI 3.0 skin on top. The Realme 9 Pro+ features a triple rear camera setup, headlined by a 50-megapixel primary sensor. It is also equipped with a 16-megapixel selfie camera. The handset is fitted with a 4,500mAh battery which offers 60W fast charging support.