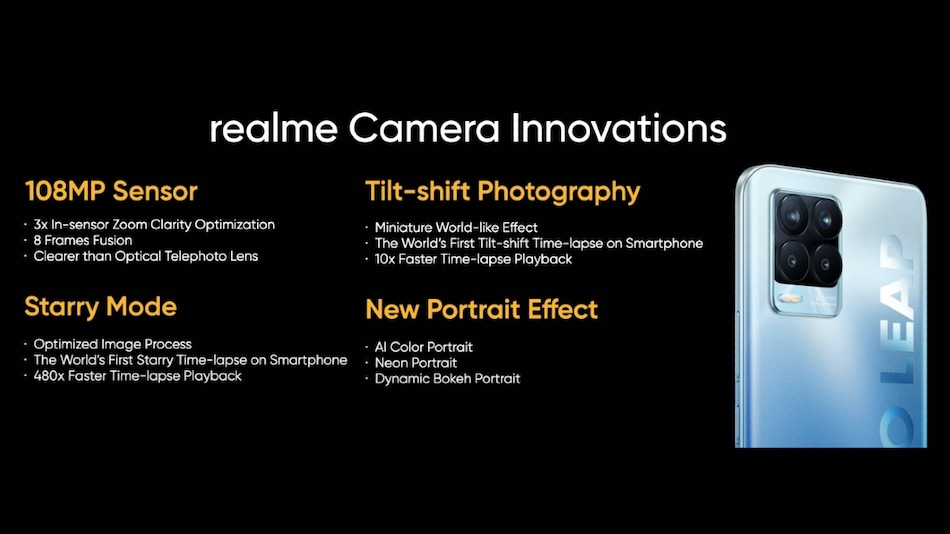 Realme 8 series is aimed to deliver an enhanced camera experience

Realme 8 Pro will come with a 108-megapixel Samsung HM2 primary camera sensor, the company announced on Tuesday through a virtual event. The new camera sensor, which was introduced in September, is already a part of Xiaomi's Mi 10i. In addition to the 108-megapixel primary camera sensor, the Realme 8 Pro will feature an all-new in-sensor zoom technology to offer 3x zoom claimed to be better than what you'll get from a traditional optical zoom lens. The Realme 8 series will also come with an updated Starry Mode that will work with time lapse videos, the Chinese company said.

The presence of the 108-megapixel Samsung HM2 primary camera sensor on the Realme 8 Pro will bring a well-balanced overall exposure along with vivid colours and sharp details in both bright and dark areas, Realme claimed while announcing the camera technology of its new smartphone series during the virtual event.

The Realme 8 Pro also comes with the in-sensor zoom technology that uses proprietary clarity enhancement algorithm to deliver enhanced zoomed images. The technology crops a 108-megapixel image into a 12-megapixel size. However, instead of simply cropping a large image, it combines eight 12-megapixel photos in a row to increase their clarity while zooming in to a certain area.

For further enhanced videography, Realme also announced a tilt-shift time-lapse video feature that will be available on the Realme 8 series. It comes from the preloaded tilt-shift photography algorithm that will allow capturing of both tilt-shift photos and 10x faster tilt-shift time-lapse videos. Users will also have options to adjust parameters such as the shape, angle, position, and the size of the bokeh effect when using the tilt-shift mode. The phone will also enable the adjustment of transition effect between the bokeh area and the clear area.

Details about the exact launch of the Realme 8 series are yet to be revealed. But nonetheless, the company said while concluding the event that the phones would debut “very soon.”