Realme 8 5G is teased to be powered by the MediaTek Dimensity 700 SoC. 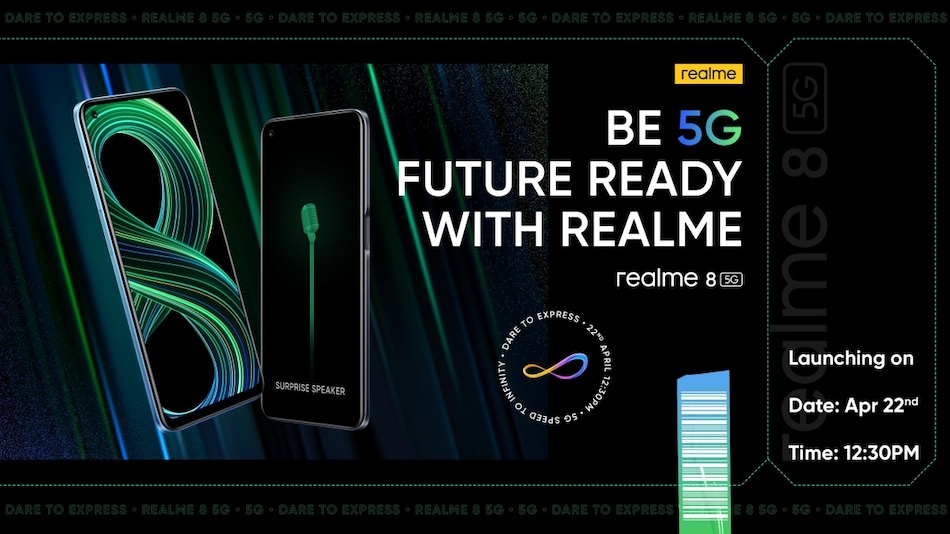 Realme 8 5G is all set to launch in India on April 22. The company sent out media invites confirming the launch event. The phone is confirmed to launch in Thailand on April 21, a day before the India launch. Realme 8 5G will be powered by the MediaTek Dimensity 700 SoC and feature a side-mounted fingerprint sensor. The phone is seen to feature a hole-punch display with the cutout placed on the top left corner of the screen.

The company has sent out media invites for the Realme 8 5G launch event on April 22. The launch event will begin at 12:30pm and there will be a “surprise speaker” at the occasion. The front panel of the phone is teased in the poster and it is identical to what has been teased in Thailand. The event will likely be livestreamed via YouTube and other Realme official social media handles. Flipkart has already listed Realme 8 5G, confirming availability on the e-commerce site.

Flipkart teases that Realme 8 5G will pack up to 128GB of storage with the option to expand further with a microSD card slot (up to 1TB). The phone is teased to run on Realme UI 2.0 based on Android 11 and have a full-HD+ display with 600nits brightness display, 90Hz screen refresh rate, and 180Hz touch sampling rate.

Realme has been teased extensively in Thailand and the phone is confirmed to be powered by the MediaTek Dimensity 700 SoC. It is teased to feature a 6.5-inch hole-punch display. The phone is seen to have a slight chin at the bottom, a 3.5mm audio jack at the bottom edge, and the SIM tray is seen on the left spine. The design also reveals a side-mounted fingerprint scanner on board. Additionally, Realme 8 5G is also teased to pack a 5,000mAh battery, be 8.5mm thin and weighs at 185 grams. The phone will come in Supersonic Black and Supersonic Blue colour options.

Leaks in the past claim the Realme 8 5G may pack 8GB of RAM as well.