The phone will be unveiled in Indonesia on September 16 along with the Realme 7. 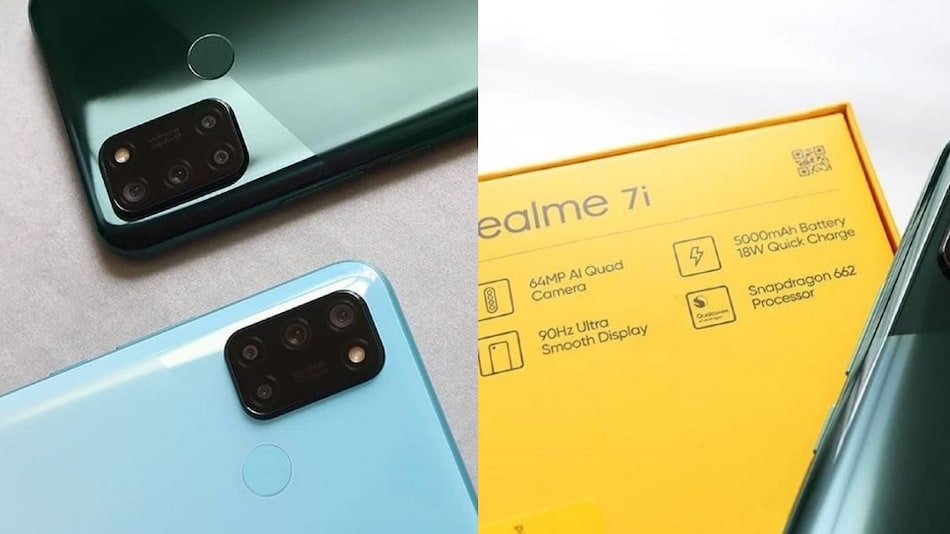 The Realme 7i photos show specifications like the large 5,000mAh battery

Realme 7i alleged live images have appeared online, a day before its launch. Indonesian reviewers have shared pictures of Realme's upcoming phone on Instagram. The phone will be launched on September 17 in Indonesia, along with the Realme 7. Key specifications have been tipped through the photos, including the Snapdragon 662 SoC and 5,000mAh battery.

The pictures of Realme 7i shared by Indonesian reviewers show the upcoming phone with a two-tone-type design. The top part of the Realme 7i appears to have a glossy finish, and the rest of the phone a matte finish. The back of the phone features a quad rear camera setup and a fingerprint reader.

Realme Indonesia had recently confirmed Realme 7i's camera specifications. It will have a quad rear camera setup featuring a 64-megapixel camera as the primary shooter.

One of the photos of Realme 7i show the retail box of Realme 7i, along with key specifications written at the back. It is in line with the previous leaks, that the phone will be powered by Snapdragon 662 SoC, and pack a 90Hz screen and 5,000mAh battery with 18W charging.

One of the Indonesian reviewers said in their post that the Realme 7i comes with 8GB RAM and 128GB of onboard storage.

Realme 7i had recently been spotted on Indonesian e-commerce portal Lazada, where the two colours were referred to as Champagne and Jade. It showed the alleged Realme 7i with a hole-punch cutout at the top left corner of the screen. Realme Indonesia had also revealed that the Realme 7i will come in Aurora Green and Polar Blue colour options.