Realme 7i is powered by the Snapdragon 662 SoC and may come in a single 8GB RAM variant. 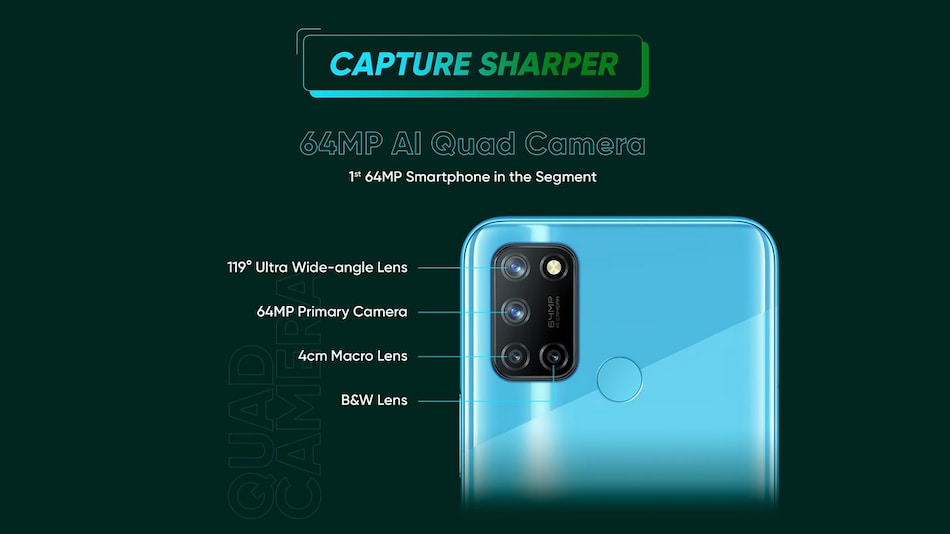 Realme 7i has a quad rear camera setup

Realme 7i will launch in India today, October 7, via a livestream on the company's social media channels. The phone joins the Realme 7 and Realme 7 Pro that were launched in the country early last month. The Realme 7i has already debuted in the Indonesian market with a single RAM and storage configuration. However, India pricing and availability will be shared at today's launch. Additionally, Realme will be showing off a bunch of different products alongside the Realme 7i including an SLED TV, electronic toothbrush, a smart cam, soundbar, and a power bank.

The Realme 7i is scheduled to launch in the country today at 12:30pm. The phone will be unveiled through a virtual event that will be livestreamed on the company's social media channels. In addition to the smartphone, the company will also unveil its 55-inch SLED 4K TV, electronic toothbrush, a smart cam, soundbar, and a power bank.

The pricing for the Realme 7i has not been shared yet. The phone was launched in Indonesia for IDR 3,199,000 (roughly Rs. 15,600) for the sole 8GB + 128GB storage variant. It comes in Aurora Green and Polar Blue colour options.

The dual-SIM (Nano) Realme 7i runs on Android 10 with Realme UI on top and features a 6.5-inch HD+ (720x1,600 pixels) display with 90Hz refresh rate and 90 percent screen-to-body ratio. Under the hood, the phone is powered by octa-core Qualcomm Snapdragon 662 SoC with 8GB of LPDDR4x RAM.

The Realme 7i has 128GB of onboard UFS 2.1 storage that is expandable via microSD card. Connectivity options include 4G LTE, dual-band Wi-Fi, Bluetooth v5.0, GPS/ A-GPS, USB Type-C, and a 3.5mm headphone jack. Sensors on board include an accelerometer, ambient light, and a proximity sensor. There is also a rear-mounted fingerprint sensor. The Realme 7i is backed by a 5,000mAh battery that supports 18W fast charging. Besides, it measures 164.1x75.5x8.9mm and weighs 188 grams.