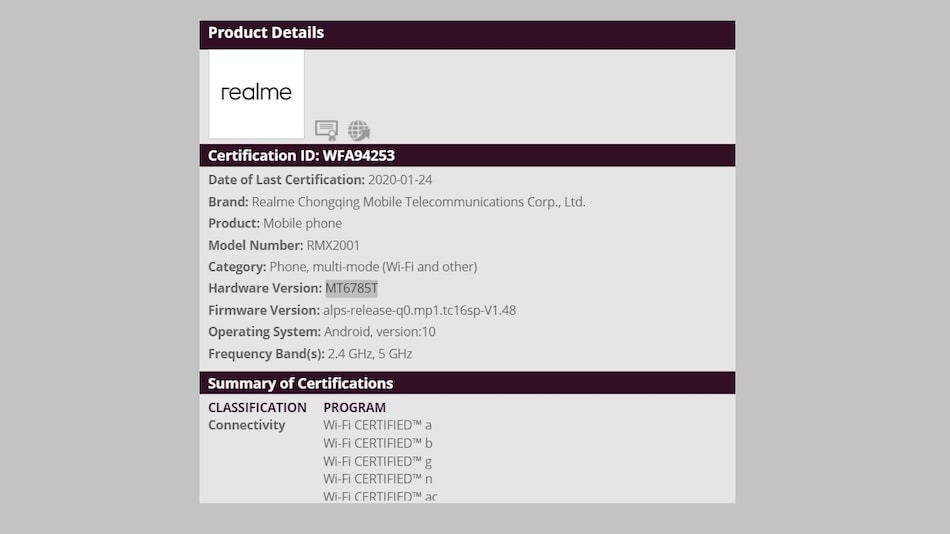 The Realme 6's Wi-Fi Alliance listing mentions support for 2.4GHz and 5GHz network bands, while its connectivity portfolio includes Wi-Fi a/b/g/n/a/ac alongside the WPA2 security standard. More importantly, the Realme 6's listing on the database clearly mentions MT6785T in the hardware version. In case you don't know, MT6785T is the internal model number of the MediaTek Helio G90T SoC. The new gaming-centric octa-core MediaTek SoC was launched back in July last year and it packs ARM Cortex-A76 and Cortex-A55 CPU cores, while graphics are handled by the Mali-G76 3EEMC4 GPU.

As for the phone itself, Realme 6 is tipped to pack a 4,300mAh battery, however, there is no information on the fast charging output. Realme 6's dimensions are 162.1 x 74.8 x 9.6mm and it will weigh 191 grams. The phone will come with support for Bluetooth 5.0 (BR+EDR+BLE standard) as well. However, we are yet to come across any official teaser or confirmation regarding the arrival of Realme 6 series of phones.

Talking about the Realme 6 series, the more powerful Realme 6 Pro has also been spotted on the Wi-Fi Alliance database after receiving the IMDA certification. The Realme 6 Pro's Wi-Fi Alliance listing mentions the model number RMX2061 and lists support for dual-band Wi-Fi a/b/g/n//ac standard, complete with WPA2 compatibility. The phone is listed as running Android 10, most likely with ColorOS skin on top and the Realme UI makeover. The Realme 6 series phones are tipped to ditch the notch and might sport a hole-punch design.