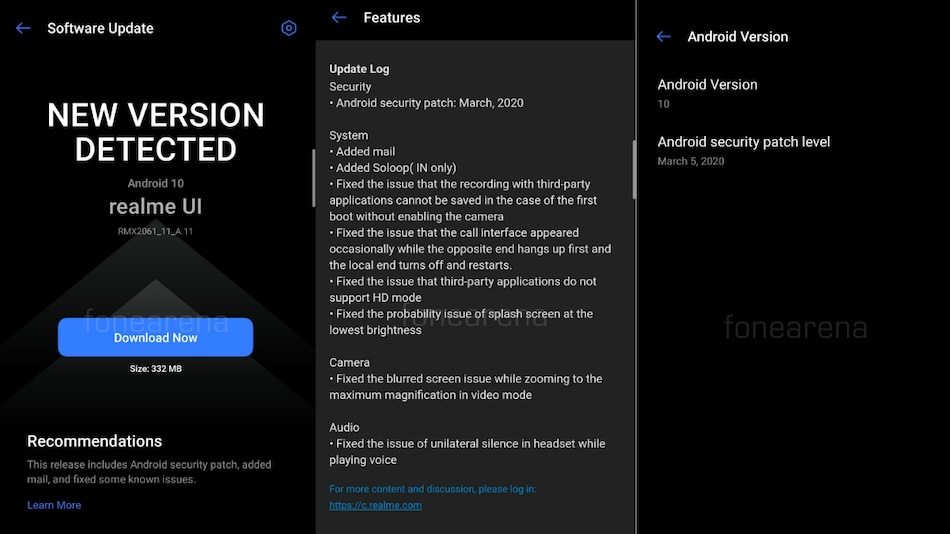 Realme 6 Pro was launched in India earlier this month, and now the phone is getting a new software update that brings along a barrage of fixes. There's also the March 2020 Android security patch that comes alongside, bringing the security level up to the mark. The Realme 6 Pro is available on Flipkart, Realme.com, and offline retail stores, and the phone's key features include support for Navigation with Indian Constellation (NavIC), developed by the Indian Space Research Organisation (ISRO).

Early adopters are taking to the community forum to share screenshots of receiving the update on the newly launched Realme 6 Pro. The phone has gone on sale only once in India, and the next sale is slated for March 19. The firmware version number for the latest Realme 6 Pro update is RMX2061_11_A.11, and its update size is at 332MB. A changelog shared by Fonearena suggests that the update brings along the March 2020 Android security update. It also brings the Soloop app, and fixes an issue where recording with third-party applications could not be saved in the case of the first boot without enabling the camera.

The Realme 6 Pro update also fixed an issue with the call interface, and brought HD mode support for select third party apps. The update also fixed the probability issue of splash screen at the lowest brightness, and fixed the blurred screen issue while zooming to the maximum magnification in video mode. Lastly, the update fixed an issue of unilateral silence in headset while playing voice as well.

Check for the update manually in Settings, if you haven't already received a notification on your Realme 6 Pro. It is recommended to download the update to your device under a strong Wi-Fi connection, and install it while the phone is on charge.