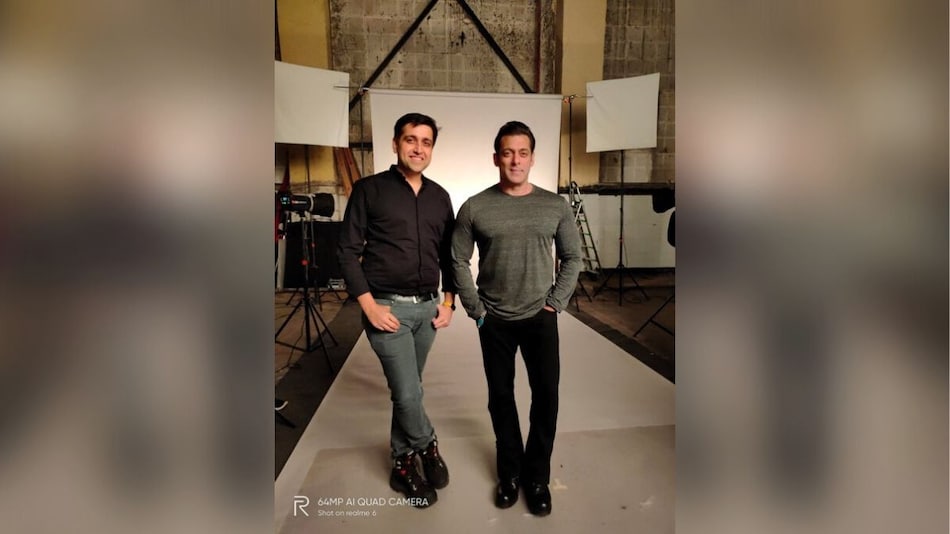 Realme India CEO Madhav Sheth today teased its upcoming smartphone, Realme 6, indicating its impending launch. A photo that was posted on Twitter, cleared the air about Realme 6 and its existence, as one can clearly notice the Realme 6 watermark located at the bottom left in the shared picture. The photo also confirmed that the smartphone will come with 64-megapixel AI quad camera. There is still no word on a launch date or what will the price tag be.

As mentioned, Realme's Sheth published a photo on Twitter earlier today with Bollywood star Salman Khan. His appearance with Khan aside, the photo had an interesting watermark at the bottom that confirmed the existence of the Realme 6 and revealed that the phone will come with four cameras at the back and the primary shooter will have 64-megapixel resolution.

Earlier this month, Realme 6 surfaced in news as the phone's certification was listed in Singapore's IMDA [Infocomm Media Development Authority] database. At the time, we were also able to spot the listing of Realme 6 on the IMDA database that carried the model number RMX2001. The same model number was later spotted on the US FCC [United States Federal Communications Commission] certification database, that revealed the smartphone is likely to carry 4,300mAh battery. Other specs such as the dimensions [162.1 x 74.8 x 9.6mm] and weight [191 grams] were too mentioned in the listing.

Overall, the key specifications of the phone remain in the dark for now. However, several leaks have suggested that the Realme 6 will ditch the waterdrop notch of its predecessor and will instead opt for a centrally-positioned hole-punch.

Currently, Realme 5 is priced at Rs. 8,600 and includes top features in this price range. The phone comes with quad rear cameras.