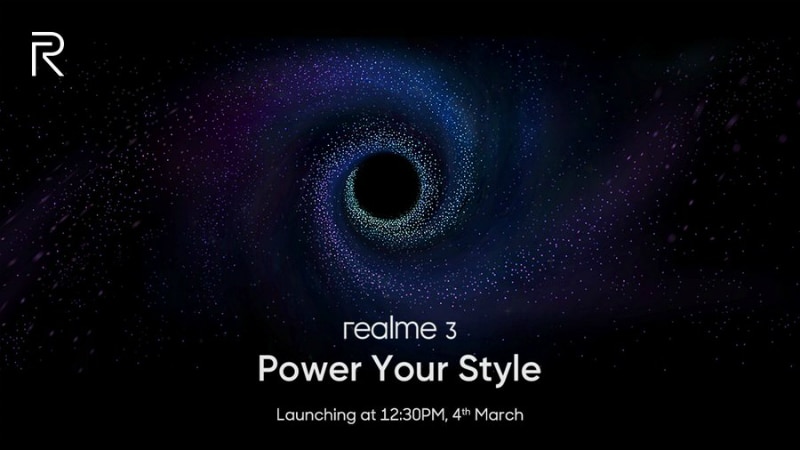 Realme 3, the next flagship phone by the Oppo-spinoff, is all set to launch in India. Realme will host the Realme 3 launch in the country at 12:30pm IST on March 4. Meanwhile, the company has started teasing the new model through its social media channels. It also on Friday sent out the media invites to confirm that the launch of the Realme 3 will take place in New Delhi. The new Realme phone is teased to sport a dual rear camera setup. It is also rumoured to have a MediaTek Helio P70 SoC.

Announcing the release date, Realme on Friday posted an image on its official Twitter account. The image highlights the launch schedule that is set for 12:30pm IST on March 4. As we mentioned, Realme also separately sent out media invites for an event in New Delhi where the new Realme phone will debut.

Realme hasn't yet revealed much about its next-generation smartphone. However, a recent teaser confirmed that the Realme 3 will sport a dual rear camera setup. The new phone is also likely to come with a diamond cut case and have a rear fingerprint sensor.

If we look at some of the rumours, the Realme 3 will have two processor variants. While the India model is likely to have a MediaTek Helio P70 SoC, its global variant is rumoured to have an Helio P60 chipset. The phone is also speculated to have a 16:9 aspect ratio and Bluetooth v4.2 support.

The Realme 3 will come as a successor to the Realme 2 that was launched in India back in August last year. Realme CEO Madhav Sheth last month revealed that the Realme 3 would debut in the first quarter of this year. The executive also reportedly specified that a phone with a 48-megapixel camera in the works.