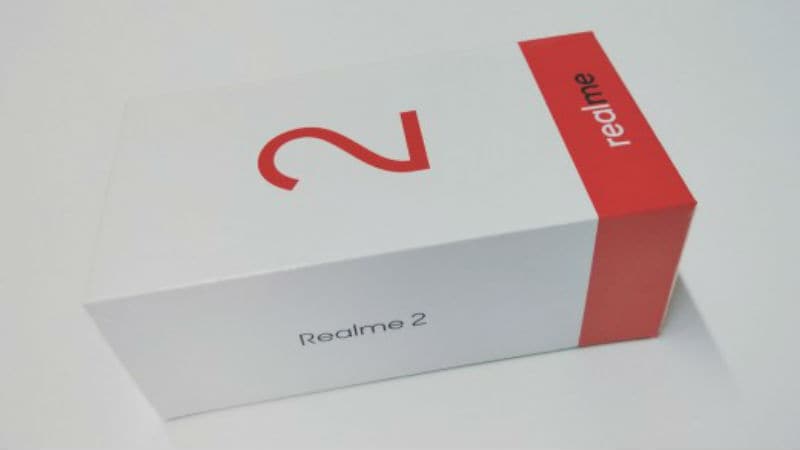 Realme 2, the successor to Realme 1, is expected to launch in India soon. Realme recently separated from parent company Oppo to become an independent brand and it seems the company seems ready to hit the ground running. Following the launch of Realme 1 in May this year, the company appears set to launch its successor in the market. While Realme has not revealed the price, launch date, or any other details of the smartphone, a teaser image went live on the company's site earlier this week. Though the image has now been taken down, a separate report has leaked a retail box of the upcoming smartphone.

A GSMArena report has leaked the image of the retail box of the alleged Realme 2 smartphone. The leaked image has surfaced on the heels of Realme teasing the smartphone via its official site. Notably, there are not many details available regarding the Realmi 2 other than the existence of the smartphone. To recall, a teaser with the title 'A Notch Above' - had gone up on the Realme site earlier this week. The image had suggested that the smartphone will sport a display notch and a similar diamond cut back design found in the Realme 1. Also, the handset is expected to sport a horizontally stacked dual rear camera setup and a rear-mounted fingerprint sensor.

As mentioned, information around the launch date and price in India of the Realme 2 has also not been revealed, but we can expect the company to follow up in the coming weeks. To recall, its predecessor - Realme 1 - was launched exclusively in the country earlier in 2018. The smartphone's price in India is Rs. 8,990 for the 3GB RAM/ 32GB storage variant, Rs. 10,990 for the 4GB RAM/ 64GB storage model, and Rs. 13,990 for the variant with 6GB of RAM and 128GB of internal storage. The Realme 1 sports a 6-inch full-HD+ display, an octa-core MediaTek Helio P60 SoC clocked at 2GHz, 3GB/ 4GB/ 6GB of RAM, a dual-core AI-specific chip, a 13-megapixel rear camera, and a 3,410mAh battery under the hood. There is dual 4G VoLTE support on the Realme 1.

As mentioned, Oppo sub-brand Realme broke away to become an independent brand last month, and is currently headed by Sky Li, who has previously worked as the overseas head for Oppo. He is credited with having helped the Chinese phone giant grow from just 3 markets initially to cover in over 31 countries and regions.