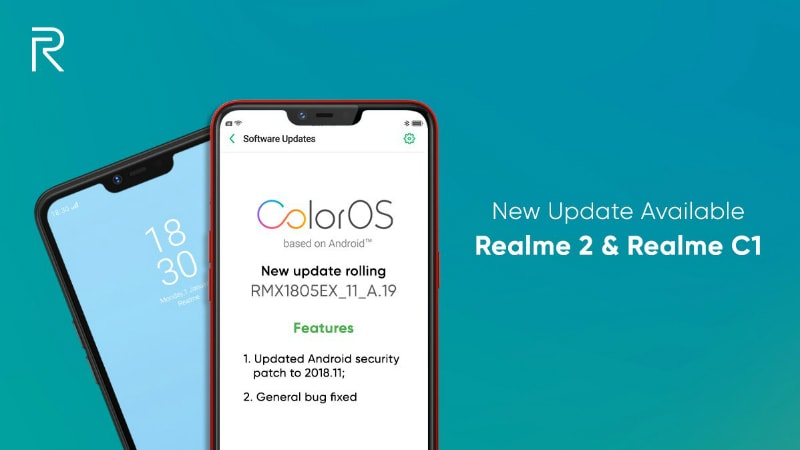 Realme on Thursday announced the release of the latest firmware update for its Realme 2 and Realme C1 smartphones in India. The new update brings ColorOS version number RMX1805EX_11_A.19 that upgrades the two Realme phones to the latest November 2018 Android security patch. Apart from that, it also brings fixes for general bugs, which have not been specified. Notably, this is not the ColorOS 5.2 update which Realme has stated will roll out on the Realme 2 sometime next month. There are no timelines for ColorOS 5.2 on Realme C1 but we can expect it to get the update with the Realme 2 itself.

To recall, Realme is a spinoff from Chinese phone brand Oppo, and recognises itself as an independent brand. The company is headed globally by Sky Li, former Global VP of Oppo. Earlier this month, the company confirmed that the Realme 2 and Realme C1 will receive ColorOS 5.2 at a later stage from the Realme 1. On the other hand, the Realme 2 will receive an OTA update on November 20 that will bring  fixes for developer options' flashing, single-swipe notification dismiss, and a headset icon.

The phone maker took to Twitter on Thursday to reveal the latest update for its two budget smartphones, along with a brief changelog. This development comes just days after Realme revealed the update roadmap for its first smartphone, the Realme 1. The Realme 1 is expected to get the ColorOS 5.2 stable update on or after November 25. It will bring features like single-swipe notification dismissal, a headset icon, and fixes for developer options' flashing.

As promised, however, the company started rolling out November 2018 Android security patch for these two phones on November 15. The replies to the original tweet suggest that the update hasn't yet reflected for users, leading us to believed that it is being rolled out gradually. Additionally, in a reply to a user, Realme India's support page said that ColorOS 5.2 will come to the Realme 2 in the end of December 2018. The company also recently confirmed it would be releasing an Android Pie update for the Realme 1 and Realme 2 smartphones 'soon'.