The latest update for the Realme 2 Pro is yet to appear on the official firmware download page. 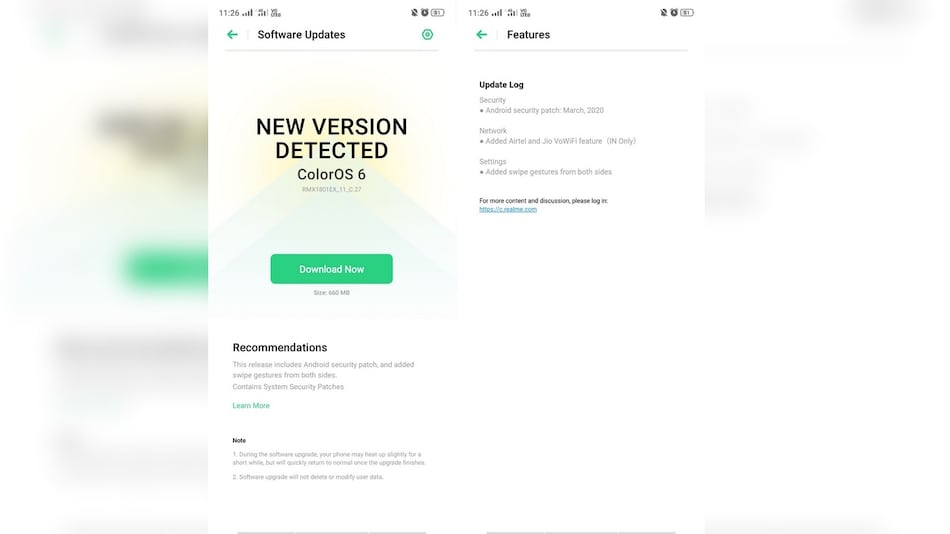 Realme 2 Pro was launched in 2018 and has received several firmware updates since then. Now, the company has released a new update adding a couple new features as well as updating to the latest Android security patch, as per user reports. The latest over the air (OTA) update, RMX1801EX_11_C.27, brings voice calling over Wi-Fi for Airtel and Jio users in India. Realme added VoWiFi calling for Airtel and Jio users in India to its Realme 3 Pro handset, earlier this month and after the update, Realme 2 Pro users will also be able to access this feature.

According to the screenshots posted on the Realme community page by a user, the RMX1801EX_11_C.27 is 660MB in size and brings the March 2020 security patch. Airtel and Jio voice calling over Wi-Fi means users can now make calls over the Internet. The update also brings swipe gestures from both sides. This will allow users of the Realme 2 Pro to go back from any screen by swiping in from either of the two sides of the phone. It will most likely be a feature that can be enabled in the Settings menu. The Realme 2 Pro will stay on Android 9 and according to the company's roadmap, the phone will get Android 10 in June this year.

To check if you have received the latest update, go to Settings, scroll down to Software Updates, and you should see the latest RMX1801EX_11_C.27 firmware here. Not all Realme 2 Pro users will have received the latest update and like other firmware updates, it should reach everyone in the next few days. We've reached out to Realme for clarity on the update's rollout. Unfortunately, the official website has not been updated with the latest firmware version so manual download and installation will not be possible right now.

The previous Realme 2 Pro update, RMX1801EX_11_C.26, brought a couple of features like flash on call, a toggle for turning on dark mode in the notification centre, and the January 2020 security patch.