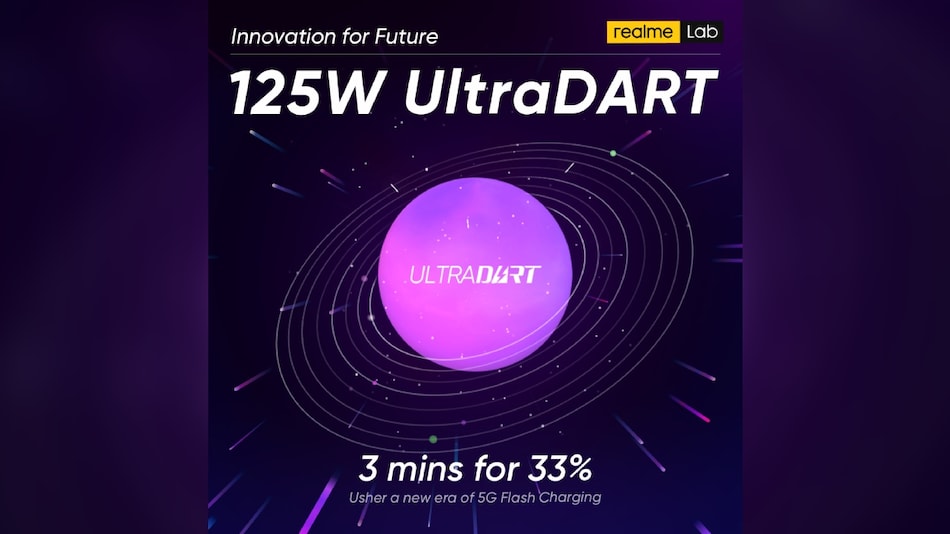 Realme 125W UltraDART can charge one-third of a 4,000mAh battery in three minutes

Realme has launched its 125W UltraDART Flash Charging technology today that promises to charge 33 percent of a 4,000mAh battery in just three minutes. The Chinese smartphone brand, which already had already introduced its 65W SuperDart fast charging solution in India with Realme X50 Pro 5G, now brings the 125W charging tech as a solution for worries related to battery life on 5G phones. Realme has also added a temperature control feature, promising that a full 100 percent recharge can be achieved in 20 minutes.

Realme 125W UltraDART Flash Charging solution can charge one-third, or 33 percent, of a 4,000mAh battery in just three minutes. The new tech promises to maintain the phone's temperature at under 40 degrees Celsius to facilitate smart and safe charging speed. Realme says that without temperature control, the technology can achieve a 100 percent charge in nearly 13 minutes. Otherwise, the 125W UltraDART is expected to fully charge a 5G smartphone in around 20 minutes.

The new technology offers multi-layer protection to avoid any possible charging-related mishaps. Realme says that the 125W UltraDART would continue charging even when the screen is on, or when games are being played on the device.

Realme has been teasing its new charging solution for quite some time now. Its 100W+ fast charger was tipped earlier this month, where the device appeared to provide a power of nearly 120W.

While Realme launched the 125W UltraDART Flash Charging solution globally today, the brand didn't reveal any details on its availability as of yet. Back in February, Realme had introduced its 65W SuperDart fast charging solution in India with the Realme X50 Pro 5G.

Oppo also unveiled its own 125W Flash Charge technology yesterday. It promises to charge a 4,000mAh battery up to 41 percent in just five minutes and achieve a full recharge in 20 minutes.