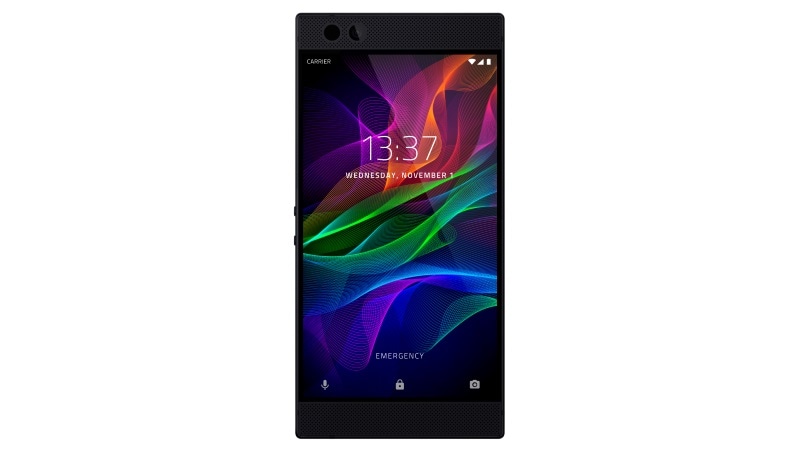 Razer has finally forayed into smartphone space with the company's first device aimed at gamers. Called Razer Phone, it comes with a display that supports refresh rates of up to 120Hz which should mean zero lag or stuttering while gaming. The company is heavily marketing the new 'UltraMotion' display on the Razer Phone.

Apart from the display, the new Razer Phone also sports stereo front-facing speakers with dual amplifiers and THX certified DAC. The smartphone also comes with the top-notch Snapdragon 835 processor. For shutterbugs, the Razer Phone also packs 12-megapixel dual cameras at the back. Backing the device is a 4000mAh battery.

Razer's ambitions in the smartphone space first became clear when it acquired Nextbit - known for the cloud storage based Nextbit Robin - back in January this year.

The Razer Phone has been priced at $699 (roughly Rs. 45,000) and will be going on sale later this month. Interested users can head to Three stores in the UK and EU as well as Microsoft Stores in the US and the company's own stores in San Francisco on November 17 to get their devices. For those unaware, Razer Phone has been launched in a GSM version which will mean that users that are tied to their mobile carriers will have to wait for the company to release a CDMA version. Razer has also announced a special edition of the new Razer Phone which will come with a Neon Green company logo at the back panel. The standard model will be available with a Black logo.

Razer Phone is also the first in its segment to come with Qualcomm's all-new Quick Charge 4+ support. The Nubia Z17 was the first device featuring the new Quick Charge 4+. It also features stereo facing front speakers, dual amplifiers, an audio adapter with THX certified DAC, and Dolby Atmos. The smartphone will launch with Android 7.1.1 Nougat, but will get an upgrade to Android Oreo in Q1 2018, as per Android Police.

Coming to its other specifications, the Razer Phone packs the Qualcomm Snapdragon 835 paired with an 8GB of RAM. The handset's biggest highlight is its 5.72-inch IGZO LCD UltraMotion display with QHD (1440x2560 pixels) screen resolution, a wide colour gamut (WCG), and as we mentioned, a 120Hz refresh rate. It also boasts of Corning Gorilla Glass 3 on top.

There are two 12-megapixel cameras on the back of the Razer Phone: one featuring an f/1.75 aperture and the other featuring an f/2.6 aperture. The back also includes a dual-tone LED flash module. At the front, there's an 8-megapixel fixed-focus camera with an f/2.0 aperture. It packs 64GB inbuilt storage that's expandable via microSD card (up to 2TB).