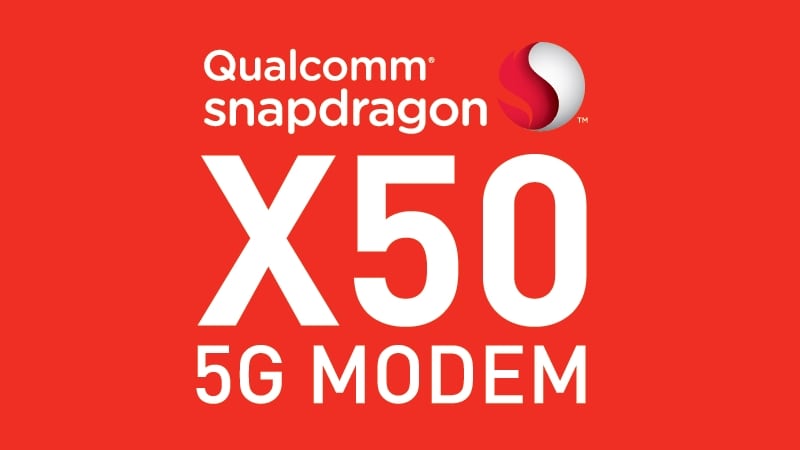 Qualcomm at its 4G/5G Summit in Hong Kong on Tuesday announced unveiled its first 5G modem - the Snapdragon X50. Alongside, the company also announced the first Gigabit Class LTE device and Gigabit-ready network in collaboration with Ericsson, Netgear, and Telstra. It also showcased the Snapdragon X16 LTE modem that enables Gigabit LTE speeds.

According to Qualcomm, the Snapdragon X50 5G modem will initially support operation in millimeter wave (mmWave) spectrum in the 28GHz band, and looks to bypass the issues of low penetration and range of the high wavelength technology by using MIMO antenna technology alongside adaptive beamforming and beam tracking techniques in non-line-of-sight (NLOS) environments.

Qualcomm adds that the X50 modem is meant for both mobile and fixed wireless broadband devices, and that it will support multi-mode 4G/5G mobile broadband. It would need to be coupled with a 4G Gigabit LTE modem and networks to be able to handle transitions across networks apart from dual-connectivity (as seen below). The company says the Snapdragon X50 5G modem offers 800MHz bandwidth support, using 8x100MHz carrier aggregation, allowing it offer peak download speeds of up to 5Gbps. The Snapdragon X50 5G platform will include Qualcomm's SDR051 mmWave transceivers alongside support for PMX50 power management chip.

Introducing the X50 5G modem, Cristiano Amon, Executive Vice President, Qualcomm Technologies, and President, QCT, said, "The Snapdragon X50 5G modem heralds the arrival of 5G as operators and OEMs reach the cellular network and device testing phase. Utilising our long history of LTE and Wi-Fi leadership, we are thrilled to deliver a product that will help play a critical role in bringing 5G devices and networks to reality. This shows that we're not just talking about 5G, we're truly committed to it."

Getting to the first Gigabit LTE-enabled device and networks, as we mentioned, Qualcomm has partnered with Ericsson, Telstra, and Netgear for the first deployment of the technology. Gigabit LTE speeds will enable peak download rates of up to 1Gbps. The first device is the Netgear Mobile Router MR1100, powered by Qualcomm's Gigabit LTE-capable 14nm Snapdragon X16 (LTE Cat. 16) modem, Qualcomm WTR5975 RF transceiver, Qualcomm Wi-Fi solutions, 4x4 MIMO, and 256-QAM to enable download speeds of up to 979Mbps. The consumer device works with Telstra's new Gigabit Class LTE network enabled by Ericsson, and currently testing device, network, and user testing is ongoing ahead of the device and network's commercial launch in the coming months.

Disclosure: The correspondent's flights and hotel for the summit in Hong Kong were sponsored by Qualcomm.

Facebook Messenger Testing 'Conversation Topics' You Can Talk About