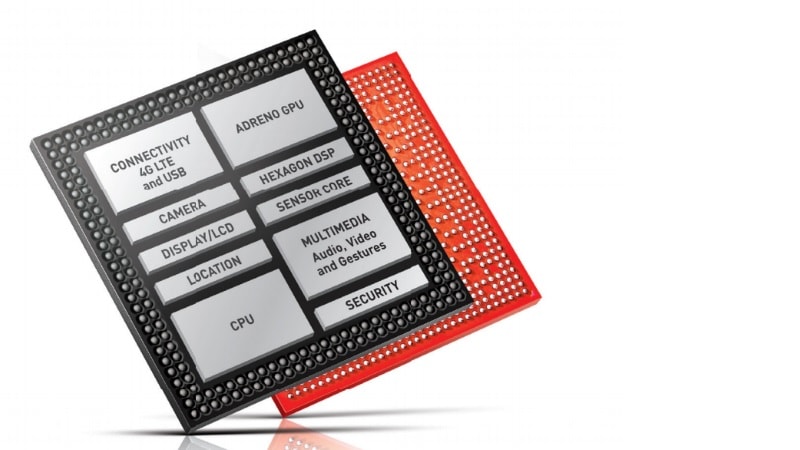 Chipmaker Qualcomm's upcoming Snapdragon 835 mobile processor, set to power most of the premium smartphones in 2017, has been detailed in several leaks ahead of its showcase at CES 2017 on Tuesday (Wednesday morning, in India). The company officially announced the processor in November last year but did not provide specific details. As per the latest leaks, the processor will be smaller and more power efficient than its predecessor and will come with support for VR and AR content.

The Qualcomm Snapdragon 835 thus far has been officially detailed to be built on the 10nm FinFET fabrication process by Samsung, support Quick Charge 4.0, and also deliver 27 percent higher performance while consuming 40 percent less power than the Snapdragon 821.

Since then however, and ahead of Tuesday's launch, a leaked blog post tips the Qualcomm Snapdragon 835 is expected to pack an Adreno 540 GPU, and be 30 percent smaller than the Snapdragon 820. "This pivotal size reduction and efficiency boost allow OEMs to manufacture thinner phones with larger batteries that run on less power and last longer," the blog post reads.

It adds, "the Snapdragon 835 supports scene- and object-based audio and audiophile-grade DSD audio. And for the most intuitive and comfortable user experiences on VR, the new SoC produces a 20 percent reduction in motion-to-photon latency and six-degrees-of-freedom for precise and pleasant motion tracking."

Apart from the improvements to battery life and the support for alternate-reality experiences, the upcoming Qualcomm Snapdragon 835 SoC is expected to provide improvements to photography, video-recording, and video playback as well. The processor has been tipped to carry several improvements in the optics department including 4K video stabilisation through advanced yaw, roll, and rolling shutter correction, apart from EIS 3.0. Also on board is support for Dual Photodiode (2PD), improving autofocus alongside enhancements to the hybrid autofocus framework for intelligent phase and lighting detection.

As per the slides, the chipset will sport four Kyro 280 cores clocked up to 2.45GHz, and four 'efficiency' cores clocked at 1.9GHz. The leaked slides further suggested that Snapdragon 835 will be the first chipset to have a Gigabit-class LTE modem in the form of X16 LTE. It is also seen to sport a Spectra 180 ISP (with smooth zoom, fast autofocus, and 'True-to-Life colours') and Hexagon 690 DSP (with Tensorflow and Hallide support). In terms of connectivity, the processor is expected to feature Wi-Fi 802.11ad connectivity Fi apart from the 256-QAM support for 4x4 MIMO and 4X carrier aggregation.

Separately, the Adreno 540 GPU is seen to support DX12 graphics, along with OpenGL ES and Vulkan apps. 10-bit 4K video can be processed at 60fps, alongside Q-Sync and wide colour gamut support. Finally, the GPU can also support 4K HEVC 10-bit playback as well as foveated video.

LG G6 and Samsung Galaxy S8 are among the alleged smartphones that can be the first to feature Qualcomm Snapdragon 835 SoC. However, we will have to wait for Qualcomm to make the official announcement till we can confirm the specifications.