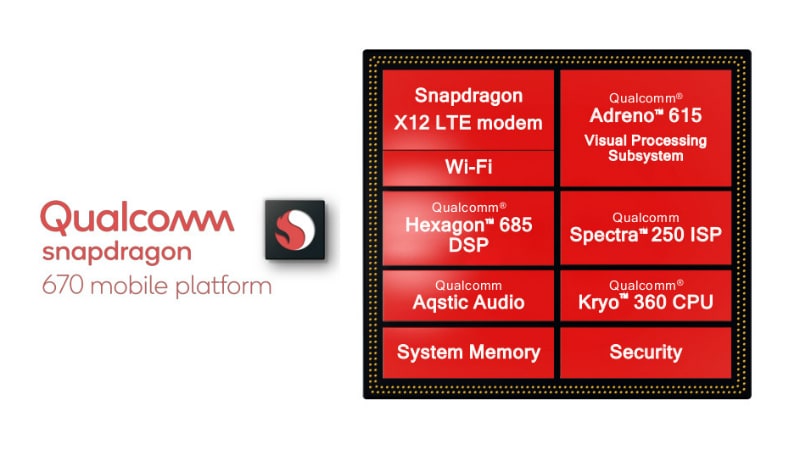 Qualcomm Snapdragon 670 SoC comes as the successor to the Snapdragon 660 SoC that was launched last year.

Qualcomm has announced the Snapdragon 670 system-on-chip (SoC) as the successor to last year's Snapdragon 660 SoC. The new chipset is built on the same 10nm process that the company previously adopted for the Snapdragon 710 and Snapdragon 845. The San Diego-based company has provided the Kryo 360 CPU alongside the Adreno 615 GPU and Spectra 250 ISP. Further, the Snapdragon 670 includes the Snapdragon X12 LTE modem that is touted to support download speeds up to 600Mbps and upload speeds up to 150Mbps. There is also Qualcomm's third-generation AI Engine that is claimed to deliver up to 1.8 times artificial intelligence (AI) performance than what was available through the previous generation. The Snapdragon 670 SoC is currently available for OEMs, though it will be available to end users through mid-range mobile devices sometime later this year.

The first in the series of major changes over the Snapdragon 660 SoC that was launched in May last year is the Kryo 360 CPU that is rated to deliver up to 15 percent higher performance than its predecessor. The CPU has two performance cores of up to 2GHz and six efficiency cores of up to 1.7GHz. The SoC also has Adreno 615 GPU that is built to enhance graphics performance. For newer camera performance, the latest Snapdragon entrant has the Qualcomm Spectra 250 ISP that brings features such as noise reduction, image stabilisation, and active depth sensing. The new Spectra ISP is also capable of enabling 4K video recording with up to 30 percent lower power consumption than its predecessor. Moreover, the ISP supports up to 25-megapixel resolution for single camera sensors and 16-megapixel for dual camera sensors.

Qualcomm has provided support for up to full-HD+ displays on its newest chipset, in addition to up to 4K support for external displays. The Snapdragon 670 SoC supports up to 16GB of RAM as well as eMMC and UFS 2.1 storage. The available X12 LTE modem on the SoC enables auto-switch between LTE and Wi-Fi - depending on which mode has the strongest signal quality and highest speeds at the time. The X12 modem is designed to support download speeds of up to 600Mbps and upload speeds of up to 150Mbps. Similarly, handset manufacturers can enable the new modem to even combine the LTE and Wi-Fi connections to boost download speeds.

In addition to supporting high-speed LTE networks, the Snapdragon 670 has the third-generation AI Engine that is rated to offer up to 1.8 times AI performance improvements when using AI applications. There is also the Qualcomm Hexagon 685 DSP that is claimed to be ideal for computing algorithms. Notably, the AI Engine supports various frameworks and tools such as Qualcomm Neural Processing SDK and Hexagon Neural Network (NN) as well as Caffe, Caffe2, TensorFlow, and TensorFlowLite among others.

To offer faster charging, the Snapdragon 670 SoC has Qualcomm's Quick Charge 4+ technology. This is rated to offer 50 percent of power in 15 minutes of charging time. The SoC has also integrated Wi-Fi 802.11ac with Mu-MIMO, Qualcomm Aqstic audio technology and aptX, Bluetooth v5, and support for six satellite systems, including GPS, GLONASS, Beidou, Galileo, QZSS, and SBAS.

If we believe some recent reports, the Oppo R17 is likely to be among the first few handsets to come with the Snapdragon 670 SoC.