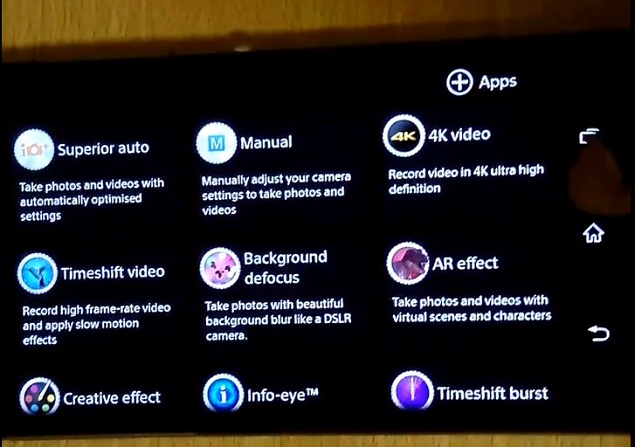 Sony's alleged successor to the Xperia Z1, thought to be codenamed Sony D6503 'Sirius', has now been shown off in an purported video.

The alleged video of the yet-to-be-announced Sony Xperia Z2 is two-minutes long, and supposedly showcases the new Xperia UI running Android 4.4 KitKat. The camera interface shown in the video also features the option to record videos in 4K.

Previously leaked screenshots of the camera settings showed off the ability to record 1080p video at 60 frames per second, and a 15.5-megapixels manual mode.

The video comes just after the recently sent media invites for the official Sony MWC event scheduled for February 24, where the Japanese giant is expected to launch its next flagship, the Sony Xperia Z2, and the successor to the Xperia Tablet Z.

The purported Sony D6503 'Sirius' video was first spotted by GSMarena, and we cannot confirm the authenticity of the video as of now.

Later, a report in January, accompanied by purported screenshots, pointed to numerous Xperia UI changes that are expected to be skinned on top of Android 4.4 KitKat when the device ships. Some of the features said to be included are 4K recording, Timeshift video, smart backlight control, the presence of two home launchers, USB DAC audio support, and more.

The revealed specifications of the alleged Sony Xperia D6503 'Sirius' so far include a quad-core Snapdragon 800 (MSM8974-AB) chipset clocked at 2.3GHz with Adreno 330 GPU; 3GB of RAM; 5.2-inch full-HD display; a 20.7-megapixel rear camera, and a 2.1-megapixel front-facing camera.
Affiliate links may be automatically generated - see our ethics statement for details.
Comments