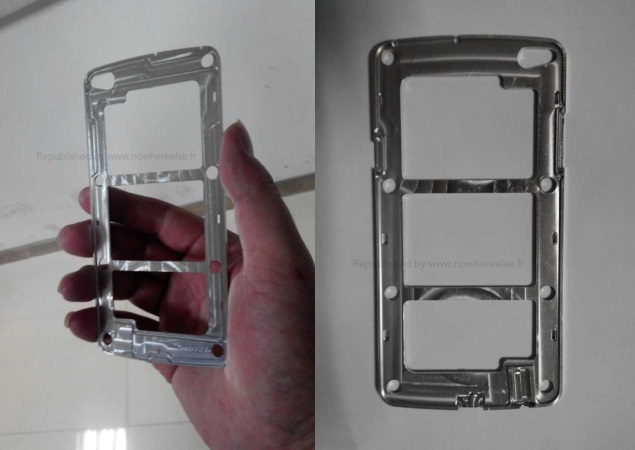 A new set of images allegedly showing a structural component of Samsung's next flagship smartphone, the rumoured Galaxy S5, has been spotted online.

French site, Nowhereelse has posted a bunch of images of the alleged Galaxy S5's metal frame. The site has also detailed the dimensions of the leaked metal frame and claim that the smartphone would be around 149mm in height, while the width can be about 72.27mm. Further, the French site notes that the display would be bigger than the 5-inch display seen on the Samsung Galaxy S4.

The site also speculates that Samsung might launch the rumoured Galaxy S5 by February next year, which is in-line with our earlier reports. The leaked images of the metal frame reveal that the South Korean might be in a mood to finally use some metal material on its next flagship.

The leaked images also clearly show gaps in the metal frame. One of the images show the camera port positioned at a corner, which hints that Samsung could change the rear camera placement for its upcoming flagship smartphone. Other physical button ports on the leaked metal frame (volume and power) are placed similar to the ones found on the Galaxy smartphones.

Earlier reports had suggested that Samsung's next-generation of high-end smartphones, including the rumoured 2014 flagship, the Galaxy S5, would be equipped with a 16-megapixel camera, but didn't indicate the type of module.

Prior to this, Samsung was rumoured to include a new eye-scanning feature on the Galaxy S4's successor.