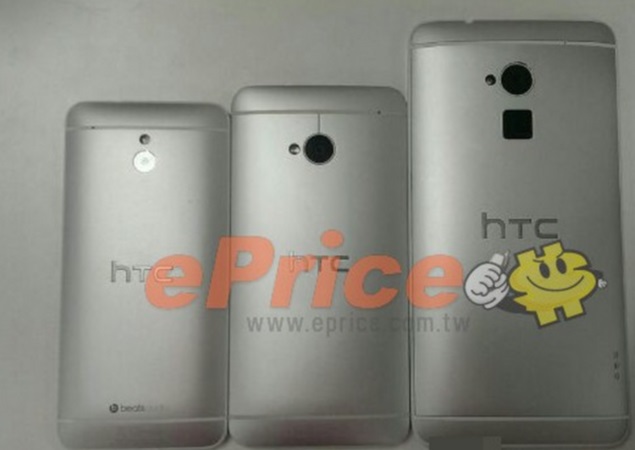 HTC One Max has been spotted in fresh images that have emerged on a Taiwanese site.

The new images posted on ePrice show the long-rumoured HTC One Max pictured alongside the HTC One and HTC One mini. The images also reveal a fingerprint scanner just beneath the rear camera, a feature that had not been seen in previous leaks. The Taiwanese site also claims that the launch of the upcoming phablet from HTC may be pushed to the end of October because of the addition of the new feature.

Last week an alleged official render of the HTC One Max surfaced online but the images did not show the fingerprint scanner on the device's back.

The fingerprint scanner, if true, could be HTC One Max's USP and could be find usage for authentication process to unlock the phone or for mobile payment authorisations.

The rumours of HTC One Max sporting a fingerprint scanner come after months of speculation of Apple's next smartphone coming with a similar feature. The iPhone 5S is rumoured to feature a fingerprint reader that may be placed under the Home button and could provide a seamless way to authenticate while unlocking the phone.

Coming back to the HTC One Max, the rumoured specifications of the device include a 2.3GHz Snapdragon 800 processor while the original HTC One is powered by a Snapdragon 600 processor. The HTC One Max is likely to sport a 5.9-inch HD display and run Android 4.3 Jelly Bean, out-of-the-box. The One Max is expected to feature the UltraPixel rear camera and 2.1-megapixel front-facing cameras as seen in the HTC One.

Nokia Lumia 625 with 4.7-inch display up for pre-orders at Rs. 19,499
Google patent points to a pay-per-gaze advertising model in the future