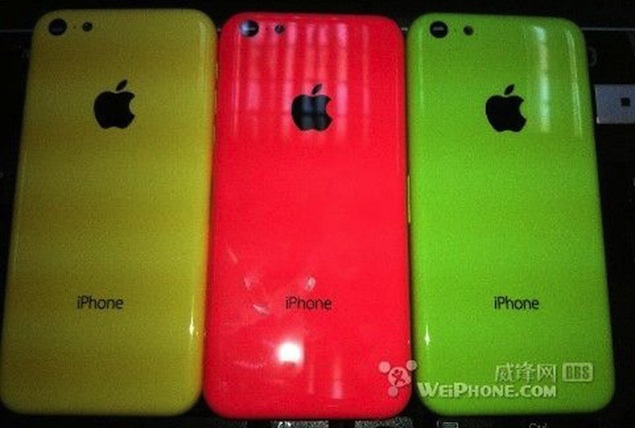 Purported pictures of what could be a colourful low-cost variant of the iPhone have surfaced online once again.

French website Nowhereelse.fr has shared a couple of pictures that originally appeared on a Chinese website depicting Red, Yellow and Green plastic shell cases of what looks like the back of a new variant of iPhone.

While the website mentions that these pictures could be of a colourful Chinese clone of the iPhone, it also notes that the internal panel sports contacts/ attachment points that can connect to components such as the motherboard and Lightning connector port at almost exactly the same points where they're positioned on the iPhone 5. 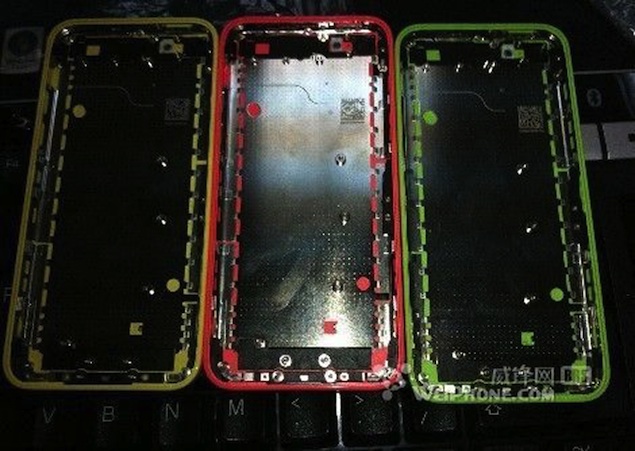 The back shell sports a black Apple logo, a round hole for the camera lens, another one for the flash and a hole for the noise cancellation microphone. The shell appears to sport a glossy finish.

What makes the pictures a little more interesting is that another picture of the rear shell that appeared in April, shared by case manufacturer Tactus, matches the new shells in terms of the overall design, including the position of the camera lens, microphone and flash holes, though it was White in colour. The case maker had said that the cheaper iPhone would be available in Black, White, Blue, Red and Yellow colours, citing the 'factory producing this secretive project' as a source. Tactus had informed that the actual phone might be around 9mm thick, 120mm in height and around 62-65mm in width, making it both taller and wider than the iPhone 4 and 4S.

Apple focused Japanese blog Macotakara had also suggested that the new low-cost iPhone will come in multiple colours. It cited two sources that suggested different colours for the purported budget iPhone. While one source mentioned that it would come in Navy, Gold Orange, White, and Grey colours, the second one suggested White, Pink, Green, Blue, and Yellow-Orange  colours. The mockup offered by the site also featured the same design elements and positioning of components, though the colours were a bit different.

KGI Securities analyst Ming-Chi Kuo had also confirmed in one of his research reports a plastic shell for the budget iPhone and had said that Apple was finding it difficult to keep the plastic shell of the low-cost iPhone as thin as it would like.
Comments

TRAI may get power to penalise service provider under new bill
Video games may boost learning in students: Report