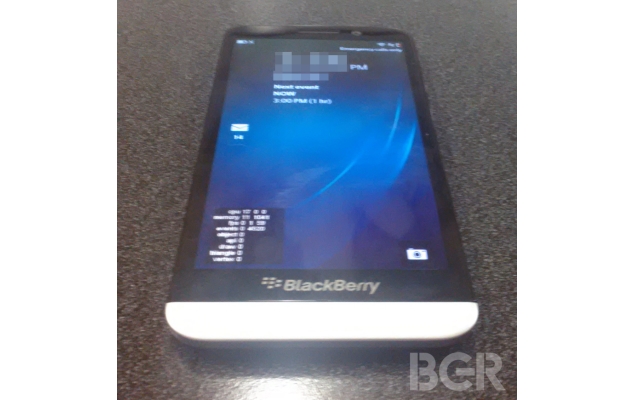 Looks like BlackBerry's alleged next flagship model, BlackBerry A10 codenamed Aristo, has made an appearance with purported images of the front panel of the device surfacing online.

The picture said to be featuring the BlackBerry A10 along with a screenshot that reveals the Aristo codename and the software version (BlackBerry 10.2), from the device, has been leaked by BGR. The picture shows a device with rounded edges and a design that looks totally different from the current crop of BlackBerry smartphones. The front panel is dominated by the display, has no physical keys, just like the BlackBerry Z10, and features the BlackBerry logo.

The site also claims that the back panel of the device would be similar to that of BlackBerry Q10. The rumoured specifications have also suggested that the BlackBerry Q10 will be the company's largest phone in terms of screen size.

The BlackBerry A10 is expected to ship with a 5.0-inch display and could feature a Super AMOLED panel with a resolution of 720x1280 pixels and boast a pixel density of 350 PPI. On the hardware front, the device is expected to be powered by a dual-core processor. BlackBerry is said to be roping in some mobile game developers and is expected to focus more on gaming for the new BlackBerry A10.

It has also been reported that BlackBerry is gearing up to launch multiple devices this year. Among these, the next-flagship BlackBerry A10 code-named Aristo, could take centre-stage in the second half of 2013.

Nokia Lumia phones to get Path, Vine and Flipboard, but no Instagram yet
TRAI to start consultation process for spectrum price soon