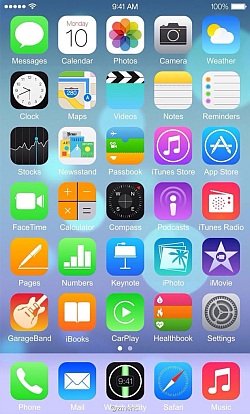 An alleged screenshot of Apple's expected upcoming iOS 8 update has surfaced online, showcasing some changes in the UI layout along with some new applications.

The home screen page seen in the alleged iOS 8 screenshot is said to be running on Apple's next iPhone model, the rumoured iPhone 6, or on an emulator of the same handset.

The purported image indicates iOS 8 will feature a 5x7 app layout grid, which is larger than the current 4x6 grid seen on iOS 7. Further, the image resolution is said to be 1600 x 966, which has not been seen in any of the Apple devices till date. Phonearena speculates such resolution to arrive with at least 400ppi pixel density on a 4.7-inch screen with a 16:10 aspect ratio.

Moreover, some new apps are visible on the home screen, like Healthbook, Carplay and Watch Utility. Out of these, Apple till now, has only made its CarPlay app official. We have already heard a considerable number of expected features of the Healthbook app, due to consistent leaks.

As far as the 'Watch Utility' app goes, it is being speculated to deal with the rumoured Apple iWatch, but no further details about it can be gleaned from the leaked screenshot. Interestingly the Preview and TextEdit apps, recently seen in an alleged iOS 8 screenshot, are not shown here.

Notably, all these details about iOS 8 can be taken with a pinch of salt as the authenticity of the leaked screenshot is still questionable and needs to be confirmed.

Earlier this week, a bunch of new features were rumoured for iOS 8, that included better Apple Maps app, a simplified notification centre, and enhanced messaging options, apart from making some iTunes Radio changes.

Call of cyber duty: Military academies take on NSA
Heartbleed bug: What you need to know