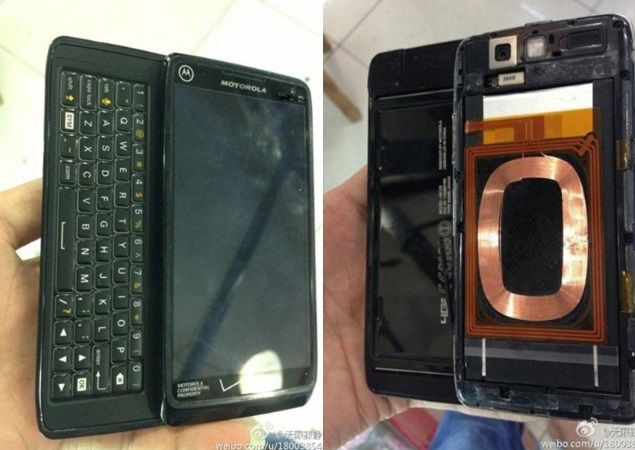 While all eyes are still on Motorola's recently unveiled flagship phone, Moto X, it appears that Motorola is preparing to expand its Droid line-up of smartphones with Motorola Droid 5.

If the images posted on Chinese social network Weibo are to be believed, the Google owned handset maker is allegedly gearing up to launch the next Droid phone that follows Droid's design aesthetics and features a 5-row slide out QWERTY keyboard. The various leaked images, reveal that the alleged Droid 5's front panel will not house any physical button and that the rear panel will include the camera alongside flash. The Verizon 4G LTE logos on the front panel also suggest that the device will head to the US carrier.

New Cell Phones bloghas noted some of the specifications of the alleged Droid 5 that include a 4.3-inch or a 4.5-inch display with a full slider QWERTY keyboard. The handset will reportedly feature wireless charging, support NFC, and would be water and dust resistant. No other details are known.

Motorola's flagship smartphone, Moto X was launched earlier this month for a suggested retail price of $199.99 to customers who sign a two-year contract with five of the biggest U.S. mobile network operators.

The Moto X features a 4.7-inch display with a resolution of 720x1280 pixels. It is powered by a 1.7GHz dual-core Qualcomm MSM8960Pro Snapdragon processor coupled with 2GB of RAM. It offers 16GB of internal storage. It also sports a 10-megapixel rear camera accompanied by an LED flash and a 2-megapixel front-facing camera. The Moto X also features a shake gesture that directly opens the phone's camera app.

The device runs Android 4.2 Jelly Bean. Users can customise the body of the phone and choose from 18 back covers, different colour accents for the ring around the camera lens, accents around the volume and on-off buttons and get a personal message etched at the back of the phone. However, the customisation feature is limited to US carrier AT&T.