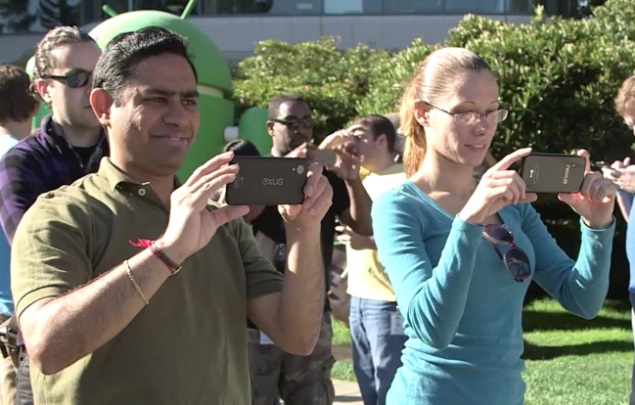 Google made waves on Tuesday when it announced the next iteration of its mobile operating system. Google confirmed that the next Android version Android 4.4, will be called KitKat, just like the chocolate. But it seems that the search engine giant also accidentally revealed the next Nexus smartphone.

In the official promotional video of the KitKat announcement released by Google, a person can be seen holding up a phone and is either clicking pictures or recording video. The phone sports a Nexus logo at the back.

However, the device has not been fully revealed but the rear panel of the device looks very identical to the Nexus 7 (2013). But the phone is smaller in size, and is definitely not a device that has been officially launched yet. The back of the mysterious phone has a matte finish and also includes a large camera lens which has not been seen on any Nexus device, yet. Interestingly, the alleged Nexus device also looks bigger in hand than the current Nexus 4 which can also be seen in the video in the hands of another individual.

Google has pulled down the announcement video from YouTube and has marked it as private which has only fuelled speculation that the next Nexus phone was accidentally outed in the video.

There's no word yet on when the next Nexus phone will be launched, though it is expected to be within the next couple of months. One can also expect more details related to Android 4.4 to be revealed alongside.

Earlier, a report claimed that LG will be the official Nexus manufacturer for a second year in a row, although Google-owned Motorola may seem a logical OEM for manufacturing the next Nexus smartphone.

For many Android fans, Google's Nexus series of devices represent the purest form of the OS, with no manufacturer skins and automatic updates straight from Google without any delays or intermediaries. Thus, there's plenty of interest in the device already.

Someday worth billions, but now, they need a desk
Apps bring lock and key into the digital age