Another Poco phone has been spotted with the same design as the Poco X3 NFC and a dual camera. 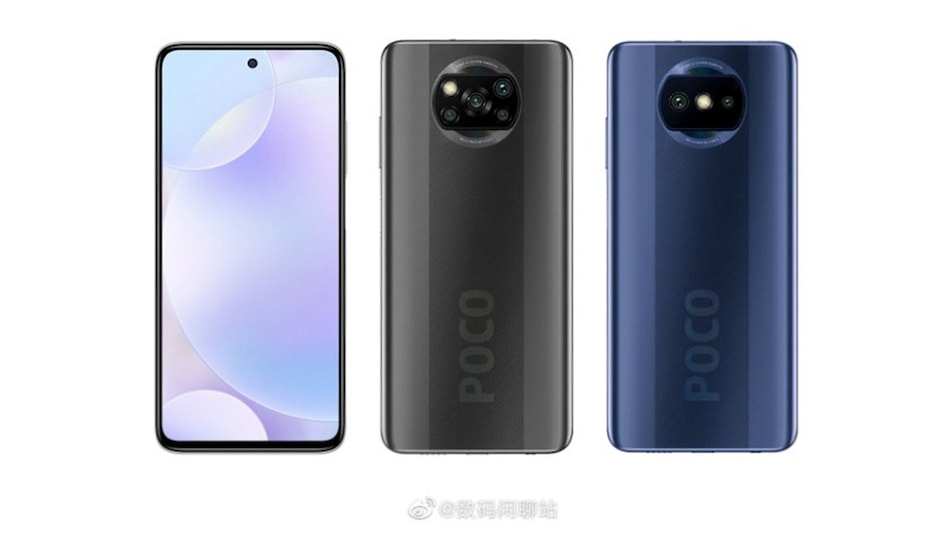 Along with Poco X3 NFC, protype of another Poco phone with two rear cameras has been leaked

Poco X3 NFC key specifications have been leaked ahead of phone's virtual launch to be held later today. The smartphone's key specifications have once again been tipped, including its 64-megapixel helmed quad rear camera setup and front camera details, its battery capacity, its display size and resolution, as well as its processor. These details were seen written on an image of an alleged protective sleeve of the phone shared by a publication. There is also another Poco phone in development that has two rear cameras, as per a leak.

The Poco X3 NFC will pack a 5,160mAh battery that supports 33W fast charging, as per an alleged protective sleeve shared by GizmoChina. The 6.67-inch full-HD+ display supports a 120Hz refresh rate and a 240Hz touch sampling rate, the leak adds. The information on the sleeve confirmed that the Poco X3 NFC will be powered by the Snapdragon 732G SoC. It also notes a quad rear camera setup with a 64-megapixel primary sensor, a 20-megapixel camera for selfies.

Most of this information of the Poco X3 has been seen before in previous leaks, retailer listings, and teasers.

The Poco X3 NFC is tipped to have 6GB RAM onboard, and 64GB of inbuilt storage. It was spotted running MIUI in an unboxing video, and is expected to be running on top of Android 10. The phone has a fingerprint scanner on the side of the device that doubles up as a power button.

As per recent listings of the phone spotted on a Shopee retail website posted by XiaomiOfficialStore.ph, the Poco X3 NFC Standard Version was listed as PHP 10,990 (roughly Rs. 16,650) and PHP 12,990 (roughly Rs. 19,650). However, the listing was soon replaced by a placeholder that just mentioned the availability date for the upcoming product – September 8.

Poco X3 NFC will be launched today, September 7. The livestream will start at 8pm GMT+8 (5.30pm IST) on the company's official YouTube, Facebook, and Twitter handles. Poco M2, meanwhile, is also set to be launched on September 8.

Leaker Digital Chat Station also spotted the Poco X3 prototype with the 64-megapixel quad rear camera, ahead of the launch, However, this is apparently not the only phone Poco is working on right now. The leaker also revealed that another prototype by the brand was spotted, which had a 48-megapixel dual camera. While no further information about this variant or its expected release date is available, it has the same rear design sported by the Poco X3 NFC.