Poco M3 launch will take place through a virtual event at 5:30pm IST on November 24. 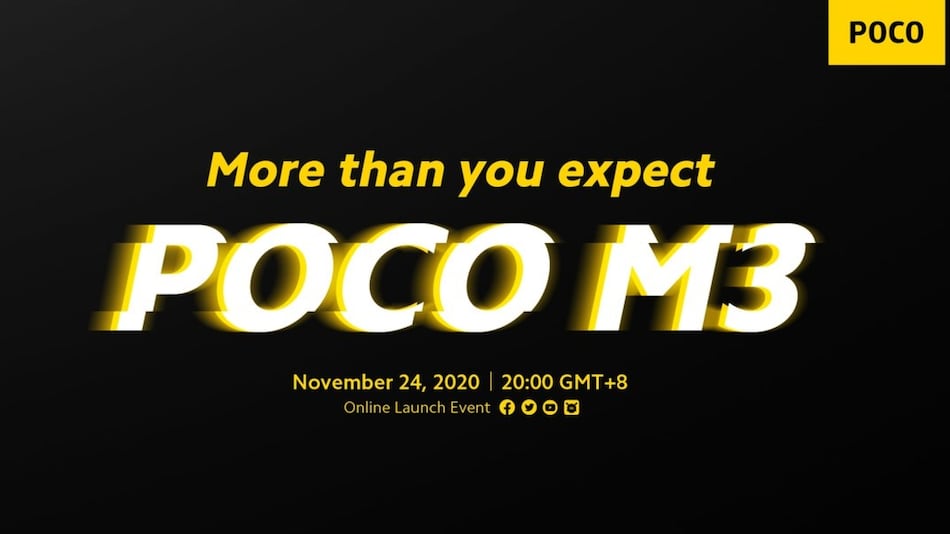 Poco M3 is set to launch on November 24, Poco has announced on Twitter. The new smartphone will be the third model in the Poco M series, after Poco M2 and Poco M2 Pro. While Poco is yet to reveal details about Poco M3, some of its key specifications have surfaced online. The Poco phone is expected to come with the model number M2010J19CG that recently surfaced on benchmark site Geekbench. Poco M3 is also speculated to be a rebranded version of an upcoming Redmi phone that could arrive as Redmi Note 10.

As per the tweet posted by Poco Global via its official Twitter account, the Poco M3 launch will take place through a virtual event at 5:30pm IST on November 24.

I don't know about you, but I truly miss the feeling of waiting for a new POCO to be revealed. 🙌
Introducing POCO M3, Our MOST ???? yet! 😏#POCOM3 Is #MoreThanYouExpect pic.twitter.com/pQKQoGbFSe

Official details about Poco M3 are yet to be revealed. However, Poco Marketing Manager and Global Spokesperson Angus Kai Ho Ng last month teased that a new Poco phone would arrive before the end of 2020. It is speculated to be a rebadged Redmi Note 10 that has been a part of the rumour mill with model number M2010J19CG. This handset appeared on Geekbench with an octa-core SoC. A Chinese version of Redmi Note 10 also recently surfaced on the China Compulsory Certificate (3C) website with model number M2010J19SC.

Poco hasn't yet provided any details about Poco M3. But nonetheless, tipster Mukul Sharma has shared some of its purported specifications through a video posted on YouTube. The tipster said that the phone would come with a 6.53-inch full-HD+ display along with a Dot Drop design (company speak for a waterdrop-style notch). Under the hood, the Poco M3 is rumoured to have an octa-core Qualcomm Snapdragon 662 SoC. The smartphone is also expected to feature a triple rear camera setup, highlighted by a 48-megapixel primary sensor.

Poco M3 will feature dual speakers and pack a 6,000mAh battery with 18W fast charging support, according to the tipster.