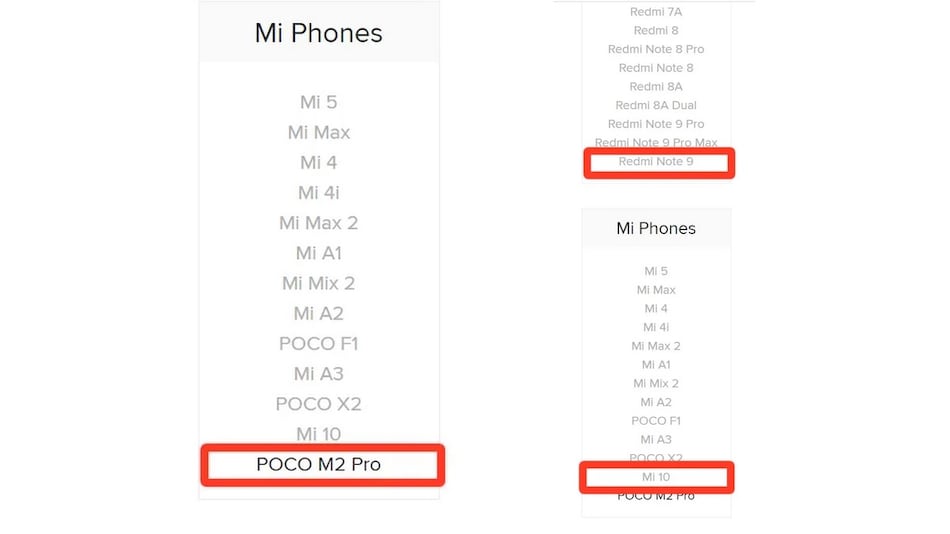 Poco M2 Pro was listed under Mi Phones on the website

Poco M2 Pro, another surprise entry to Poco's smartphone lineup, was reportedly spotted on Xiaomi India's RF Exposure Page. Though the listing has now been taken down, it shows that another Poco smartphone is in development. There were no details about the phone in the listing, except for its model number and SAR limit. Since the listing has already been taken down, it's clear that Xiaomi is not ready to share details about the phone just yet. Additionally, the Redmi Note 9 and the Xiaomi Mi 10 were spotted in the listing as well suggesting the phones will be coming to the Indian market.

According to a report by MySmartPrice who first spotted the now removed listing for the Poco M2 Pro, the model number for the phone is M2001J2I and its SAR limit is 1.6 W/kg (over 1 gram). This listing tells us that the phone will come to the Indian market. The report also states that since the model number for Poco F2 Pro is M2004J11G, which is quite different to the Poco M2 Pro's model number, the former will not be a rebranded Poco F2 Pro. It may be a new phone all together.

The Poco F2 Pro's price was recently tipped showing a significantly higher European price tag. Also, a previous report suggested that it might be a rebranded Redmi K30 Pro. While Xiaomi has not shared any information on the Indian availability of any of the above mentioned phones, the Redmi Note 9 will go on sale globally in mid-May.