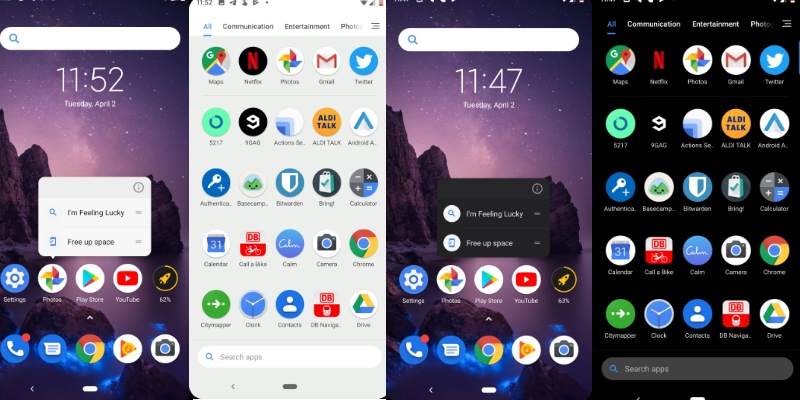 The Poco Launcher has received an update, and the most notable improvement includes the addition of a new dark theme in Launcher Settings. The new dark theme can be found buried deep inside Launcher Settings, and it's different from the system-wide Dark Mode that is still being tested by Xiaomi, and is slated for roll out in the future. The new update to the Poco Launcher also brings along bug fixes, sharper app icons, the ability to add custom apps to App vault shortcuts, and a more responsive UI as well.

This new dark theme was first spotted on the Poco F1 by Android Police, and it arrived with Poco Launcher version 2.6.5.7. To enable dark theme, tap and hold the empty space on your Homescreen > click on Settings icon > More > Backgrounds. Inside the Background settings, users can choose between a light or dark theme. There's also an option to set app drawer background transparency. The report states that "if you have no transparency set up, dark mode will turn all panes' backgrounds to pure black, saving you some snake oil amounts of extra battery life versus just a grey mode."

Apart from the new Dark Theme, Poco Launcher version 2.6.5.7 also fixes icon pack bugs and UI bugs. It added the ability to add custom apps to App Vault shortcuts, and double tapping the screen to lock device works on all compatible models now. The update brings crisper, prettier, and sharper app icons as well. As the Poco Launcher is available to download for all Android users, the dark theme feature can be used by anyone who has Poco Launcher installed, and not just Poco F1. The update can be manually downloaded via APK Mirror, and is also available on the Google Play store, where the changelog is listed.

Tesla to Pay $31,000 to Settle US EPA's Hazardous Waste Claim
PS4 Digital Game Refunds Can Be Claimed Within 14 Days of Purchase: Sony