Poco F4 GT is shown to have a gaming-focused design, matching the Redmi K50 Gaming Edition. 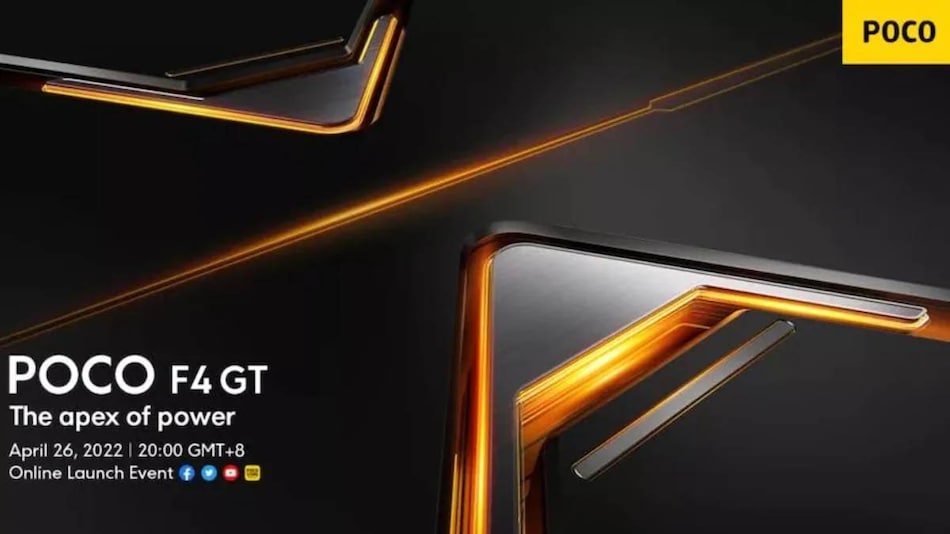 Poco F4 GT is said to come in four colours

Poco F4 GT is all set to launch on April 26 globally, and ahead of its official launch, a new leak has shared renders and specifications of the smartphone. The Poco F4 GT will reportedly include a 6.67-inch AMOLED full-HD+ display that offers a 120Hz refresh rate, and Gorilla Glass protection. The smartphone is also said to be powered by a Snapdragon 8 Gen 1 SoC. The specifications indicate that the Poco F4 GT may be a rebranded version of the Redmi K50 Gaming Edition, that was launched in China in February.

As per a report by Winfuture.de, the Poco F4 GT is a gaming smartphone, and the back of the phone is designed in a way to indicate the gaming background of the phone. It is said to come with a yellow colour (the Poco brand colour) variant again. The device is said to be fitted with various buttons on the case, which have been specially designed for gamers. In addition to the yellow version, the Poco F4 GT is said to come in three colours, which is said to include Cyber Yellow, Knight Silver, and Stealth Black.

The design appears to match that of the Redmi K50 Gaming Edition, which is reportedly the smartphone that will be rebranded as Poco F4 GT. To recall, the Redmi phone was launched in February.

As mentioned, this Poco smartphone will reportedly offer a 6.67-inch AMOLED full-HD+ display with a hole-punch cutout for the front camera, positioned in the centre of the screen. The Poco F4 GT is said to come with 8GB of RAM and 128GB or 256GB of inbuilt storage, and will reportedly pack a 4,700mAh battery with support for 120W fast charging.

As for the rear cameras, the Poco F4 GT is said to be equipped with a 64-megapixel Sony IMX686 primary sensor. There isn't much information about the auxiliary cameras as of now. We also don't have any official information on whether the smartphone will also have a 12GB RAM variant, like the Redmi K50 Gaming Edition.

Should you buy a 4G or 5G budget phone? We discuss this on Orbital, the Gadgets 360 podcast. Orbital is available on Spotify, Gaana, JioSaavn, Google Podcasts, Apple Podcasts, Amazon Music and wherever you get your podcasts.