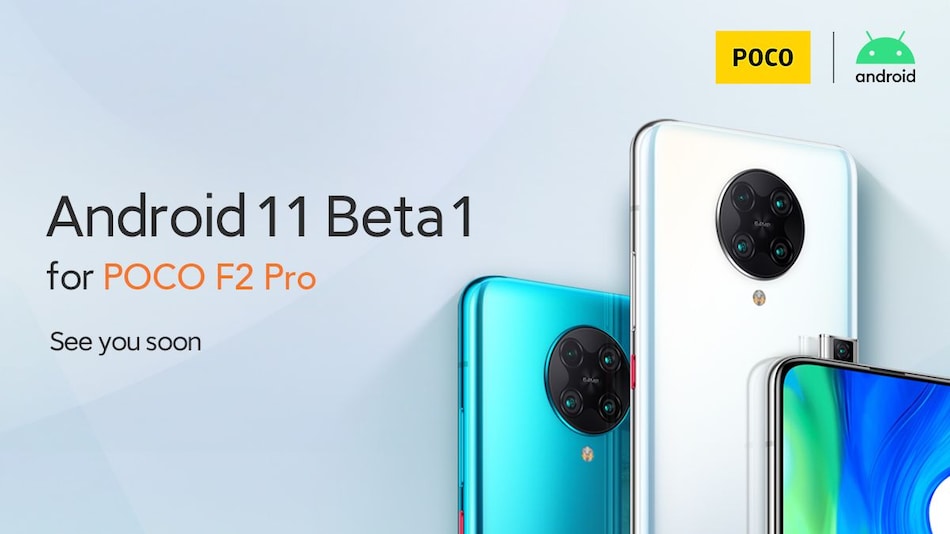 Poco, the Xiaomi sub-brand, has announced that its recently launched Poco F2 Pro will be getting Android 11 beta 1. The development was shared on Twitter by Poco's global account and comes right after Google released the Android 11 beta 1 for Pixel phones. The Poco F2 Pro currently runs MIUI for Poco, based on Android 10, and now it will be receiving an Android 11 beta 1 based MIUI for the interested users. Notably, the Poco F2 Pro has not made its way to India yet, but the company recently teased a new Poco smartphone coming to the country soon.

The tweet by Poco does not reveal the timeline for when the Android 11 beta 1 will arrive for the Poco F2 Pro. The phone currently runs MIUI for Poco that is a slightly tweaked version of MIUI found in Xiaomi phones. Xiaomi has already announced that it would release Android 11 beta 1 for Mi 10 and Mi 10 Pro phones. Apart from Xiaomi, a couple other smartphone manufacturers have announced the next iteration of Android for their phones.

To recall, the Poco F2 Pro launched globally in May as a rebranded version of the Redmi K30 Pro Pro that was introduced in China in March. The phone runs MIUI for Poco that is based on Android 10. It features a 6.67-inch full-HD (1,080x2,400) HDR10 AMOLED display and is powered by the octa-core Qualcomm Snapdragon 865 SoC. It comes with 6GB of LPDDR4X RAM or 8GB of LPDDR5 RAM. There is a quad rear camera setup that includes a 64-megapixel primary sensor, a 5-megapixel telemacro shooter, a 13-megapixel wide-angle snapper, and a 2-megapixel depth sensor. The Poco F2 Pro also has a 20-megapixel pop-up selfie camera.