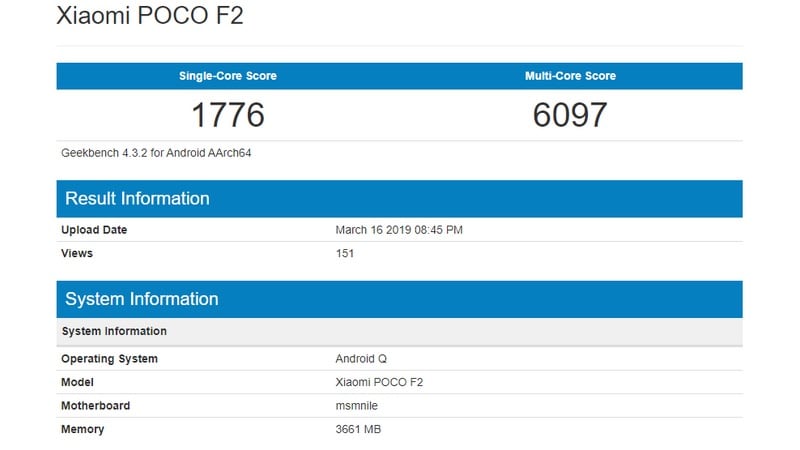 Poco F1 – the first offering from Xiaomi's sub-brand Poco – was one of the most talked about smartphones at its launch. And even though a successor is yet to be announced, it is highly anticipated. Tentatively called the Poco F2, the upcoming smartphone has reportedly been spotted on Geekbench. An alleged Geekbench listing of the Poco F2 indicates that it will be powered by the Snapdragon 855 SoC, paired with 4GB of RAM. The smartphone was also spotted running Android Q on the benchmarking platform.

Update: Turns out this Geekbench listing might be fake.

The Poco F2 was first sighted on Geekbench back in December last year, packing the Snapdragon 845 SoC paired with 6GB of RAM, and running on Android Pie. The fresh Geekbench listing of the Poco F2 suggests that it will come equipped with the newer and more powerful Qualcomm Snapdragon 855 SoC, but joined by just 4GB of RAM. The Poco F2 is also seen running Android Q on the benchmarking platform. The Poco F2's Geekbench listing was spotted by Gizmochina.

In terms of the benchmarking performance, the Poco F2 is seen to have scored 1,776 in the single-core test and 6,097 in the multi-core test. The points tally posted by the Poco F2 is quite low, especially when compared with the Geekbench scores of the Samsung Galaxy S10+ (Review), which is also powered by the same Qualcomm processor. For comparison, the Samsung flagship scored 4,406 and 10,358 in Geekbench 4's single-core and multi-core tests respectively.

We are a little sceptical about the veracity of the latest Poco F2 Geekbench listing, and there are multiple reasons to doubt the authenticity of the listing. The 4GB of RAM on the Poco F2 makes little sense, since the base variant of its predecessor – the Poco F1 – came equipped with 6GB of RAM. Also, the surprisingly lower benchmark scores indicate that something fishy is going on. Needless to say, do take the reports of Poco F2's alleged visit to Geekbench with the proverbial pinch of salt.