Poco C3 carries a similar model number as the Redmi 9C which was previously spotted in two other listings with the Poco branding. 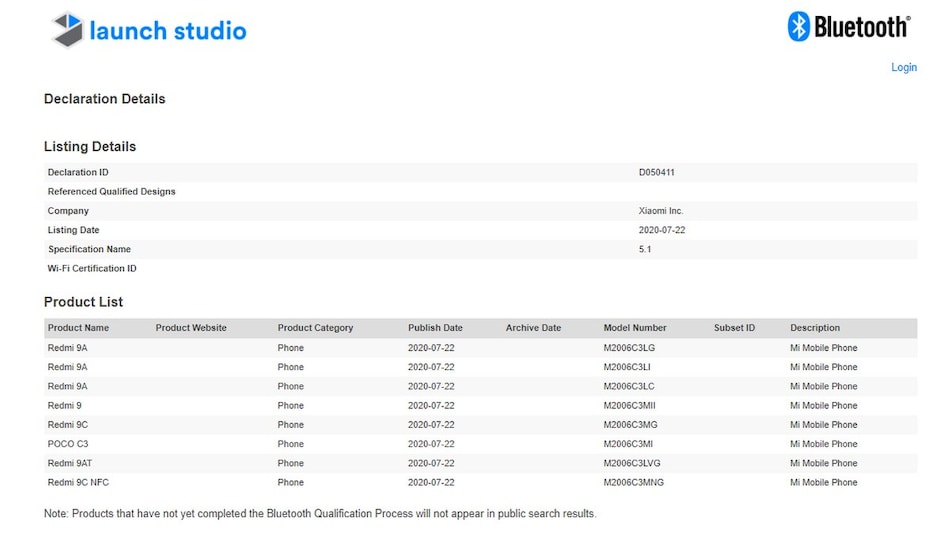 Poco C3 could be an entry level offering by the company

Poco C3 seems to be the next smartphone in the company's launch pipeline as it has been spotted in a Bluetooth SIG listing. What's interesting is that the Poco C3 carries almost the same model number as the Redmi 9C, which leads us to believe that the Poco offering will be a rebranded version of the Redmi 9C for the Indian market. To recall, the Redmi 9C launched alongside the Redmi 9A in Malaysia at the end of last month.

The Bluetooth SIG listing shows a phone named Poco C3 with model number M2006C3MI among multiple Redmi 9A and Redmi 9C phones. The model number for the Poco C3 is almost the same as that of the Redmi 9C – M2006C3MG – which suggests that the phone will be rebranded as the Poco C3 for the Indian market. There are no other details about the Poco phone, but it wouldn't be a surprise if this Poco C3 comes with the same specifications as the Redmi 9C. After all, both brands have the same parent company – Xiaomi.

The Bluetooth SIG listing was first spotted by MySmartPrice and independently verified by Gadgets 360.

Till now, there has been no word from Poco or Xiaomi on the existence of the Poco C3 so it is unclear when it will come to India and whether it will carry the same specifications as the Redmi 9C. However, this isn't the first time this model number has made an appearance online. Last week, the M2006C3MI model number was seen on Bureau of Indian Standards and TUV Rheinland websites under the Poco branding.

Talking about the specifications of the Redmi 9C, the phone features a 6.53-inch HD+ display and is powered by the octa-core MediaTek Helio G35 SoC and up to 4GB of RAM. There are three cameras on the back, a notched selfie shooter, and a 5,000mAh battery with support for 10W charging.