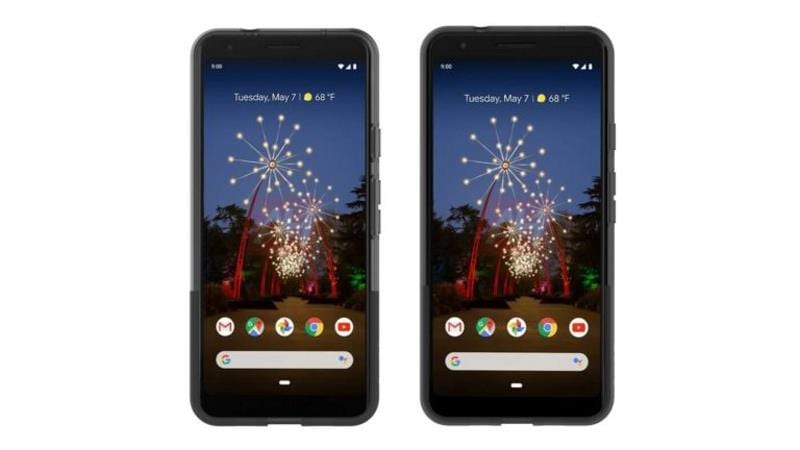 After several leaks and rumours in the weeks leading up to their launch, several details of Google's upcoming Pixel 3a and Pixel 3a XL smartphones have been reported. Now, news website Android Headlines claims to have obtained the first official 3D renders of these two devices, showing exactly how they will look for the first time. It is widely expected that Google will announce the Pixel 3a and Pixel 3a XL, which are said to be more affordable versions of the Google Pixel 3 and Pixel 3 XL, on the opening day of the company's annual Google I/O conference, which is scheduled to be held on May 7 in Mountain View, California.

The alleged renders of the new Google Pixel 3a and Pixel 3a XL show two very similar-looking devices with no screen notch. This is in contrast to the Pixel 3 and Pixel 3 XL, which are differentiated by the fact that the larger model does have a notch while the smaller one does not. Instead, both devices have relatively thick traditional borders above their screens where their earpieces and single front cameras are.

The images spotted by Android Headlines also show a slight depression on the top of each phone, appearing to confirm earlier leaks and reports that they will have 3.5mm headphones sockets on the top. Both phones also appear to have front-facing speakers in their relatively large chins below their displays.

Previous leaks have indicated that the Pixel 3a will have a 5.6-inch 1080x2220 screen, while the larger Pixel 3a XL will have a 6-inch 1080x2160 resolution screen. Some fans might be disappointed that Google's more affordable new Pixel smartphones are also not smaller than the existing Pixel 3 and Pixel 3 XL (Review).

Given the difference in the two phones' sizes, their batteries are also likely to differ, though at 2915mAh and 3000mAh indicated for the two models respectively, this difference should be minor. Both phones could also feature the same 12.2-megapixel cameras found on the premium Pixel 3 range, given that photography is one of Google's main selling points for its smartphones.

The renders show May 7 as the date on screen, lending credibility to the theory of a launch announcement at Google I/O. Unfortunately, there's no word yet on pricing or global availability.