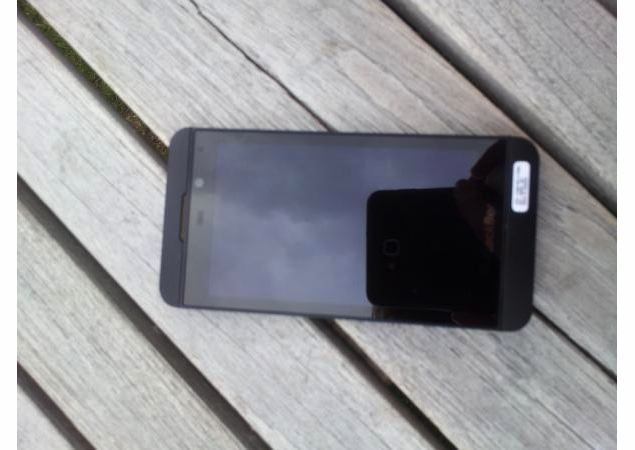 Research in Motion may not be ready to let the cat out of the bag and show us what the next generation BlackBerry smartphones will look like but that hasn't stopped the leaks from pouring in.

The first purported picture of BlackBerry 10 smartphone has been posted by N4BB. According to the website, this is a picture of the L-Series smartphone running on the new operating system. The picture shows the home screen of the smartphone with some of the apps such as BBM, DocsToGo, Facebook, and StoryMaker.

However, it is hard to speculate whether this picture is taken from prototype smartphone that RIM has been showing off globally or is it really from the near final version of L-Series BB 10 smartphone that will be launched in early 2013.

Moreover, this is not the only picture that has gone online in the past 24 hours. A Twitter user, @TyC4all, too has posted a picture of this smartphone and his tweet reads "first image of the pre-commercial version".

Additionally, an Italian site BlackBerryItalia.it has posted a video of this upcoming smartphone. According to this video this new smartphone will be powered by 1.5 GHz TI OMAP dual-core CPU and have 1GB of RAM, 16GB of internal storage, and a 8-megapixel camera on board. This, of course, contradicts the reports so far that indicate BlackBerry 10 smartphones will be powered by Snapdragon S4 Pro quad-core processor.

Frankly, the new leaks pose more questions than answers. The only thing we do know for certain right is that BlackBerry is trying hard to get its act together with BlackBerry 10 powered smartphones slated for early 2013 release. Also worth remembering are comments by Thorsten Heins, CEO of Research in Motion, that the new BlackBerry 10 smartphones will be nothing like the existing Blackberry 7.

Teaming up on video games negates aggressiveness
Kinect for Windows to get Windows 8 support, coming Oct 8