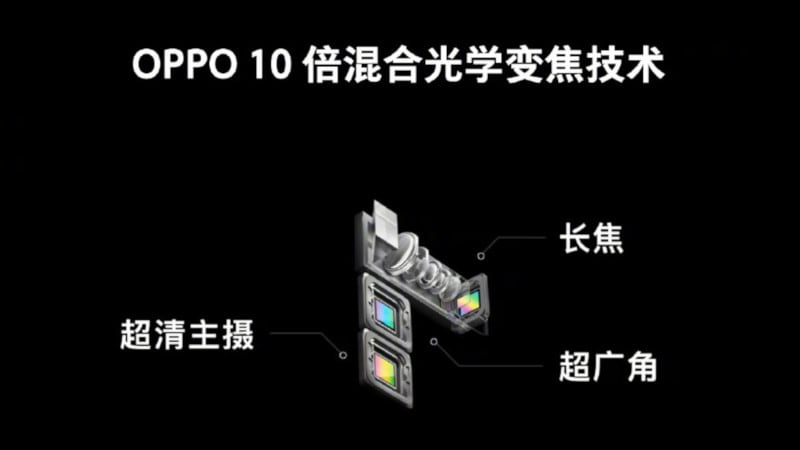 Oppo on Wednesday teased its new 10x optical zoom camera technology at an event in China. The company didn't reveal a smartphone using the technology or demo it at the event, but it did promise to share more details at the upcoming Mobile World Congress (MWC). The 10x hybrid optical zoom technology builds up on the company's 5x hybrid optical zoom system that was unveiled at MWC 2017, but never appeared in a commercial device. Additionally, the company also announced a new in-display fingerprint sensor that will allow the phone to read two fingerprints simultaneously.

As promised, Oppo earlier today offered a sneak peek at its upcoming 10x hybrid optical zoom technology at an event. The new technology is capable of offering the equivalent to 15.9mm to 159mm focal length. According to the company, it is using a triple camera setup in the new technology, instead of the dual camera setup in 5x hybrid optical zoom tech. The new setup includes an ultrawide-angle camera, a primary camera, and a third camera with periscope style setup for the telephoto action. Basically, the new setup starts with an ultra-wide perspective and zooms in to medium telephoto. The company claims all three cameras will seamlessly transition from 1x to 10x optical zoom. Like the last time round, there is optical image stabilisation in the primary camera and periscope setup to make sure the consumers don't end up with blurry shots.

Oppo notes that three camera setup makes sure the overall camera module is not very thick and can fit in a regular smartphone. The company also revealed that the setup is now ready for mass production but didn't specify when we will see it in an actual smartphone. Oppo did promise to demo the 10x hybrid optical zoom tech at MWC later this month.