Wi-Fi calling or VoWiFi lets you make and receive calls over a Wi-Fi connection. 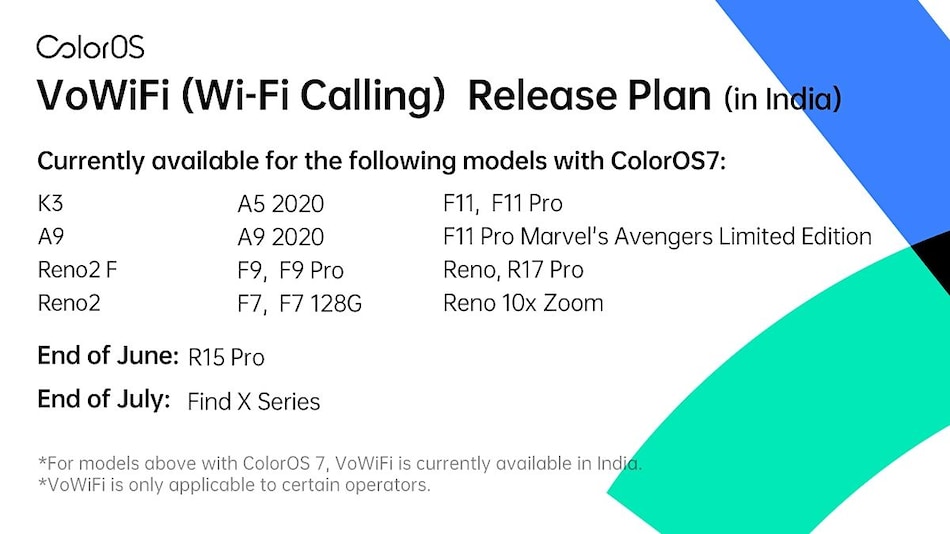 Oppo on Tuesday released a new roadmap, highlighting the list of Oppo smartphones eligible for Wi-Fi calling (or VoWiFi) feature in India. The list also includes several Oppo phones that have already received the Android 10-based ColorOS 7 update in the country. The company hints that the ColorOS 7 system update may have brought the Wi-Fi calling feature on these phones or will likely receive it in the upcoming days with another over-the-air (OTA) update. The company has revealed that the Oppo R15 Pro will be getting the latest ColorOS iteration along with Wi-Fi calling by the end of June, while the Find X series will get it in late July.

Phones inlcuded on the roadmap such as Oppo K3 has already received Wi-Fi calling with Android 10-based ColorOS 7 update in May. Other Oppo phones like Oppo A9 2020, Oppo A5 2020, Oppo F9, Oppo F9 and more have received the latest ColorOS iteration and will get the Wi-Fi calling feature in the coming days.

Oppo in the tweet has announced that the Oppo R15 Pro will get Wi-Fi calling by June-end while the Oppo Find X series will receive the feature by July-end. Both smartphones will get the ColorOS 7 update around the same time, the earlier roadmap had revealed.

What is Wi-Fi calling?

To put it simply, Wi-Fi calling or VoWiFi lets you make and receive voice and video calls over a Wi-Fi connection instead of using your cellular connection. It essentially helps users make or receive calls where cellular services are weak or unavailable. In India, Wi-Fi calling support currently works for users with Airtel or Reliance Jio sim cards.

To check the availability of Wi-Fi calling on your Oppo phone, head to Settings > Dual SIM & Mobile Network > see if Wi-Fi calling option is available. If available, users can enable it by tapping Wi-Fi calling and then choose the option "Wi-Fi Calling Preferred."