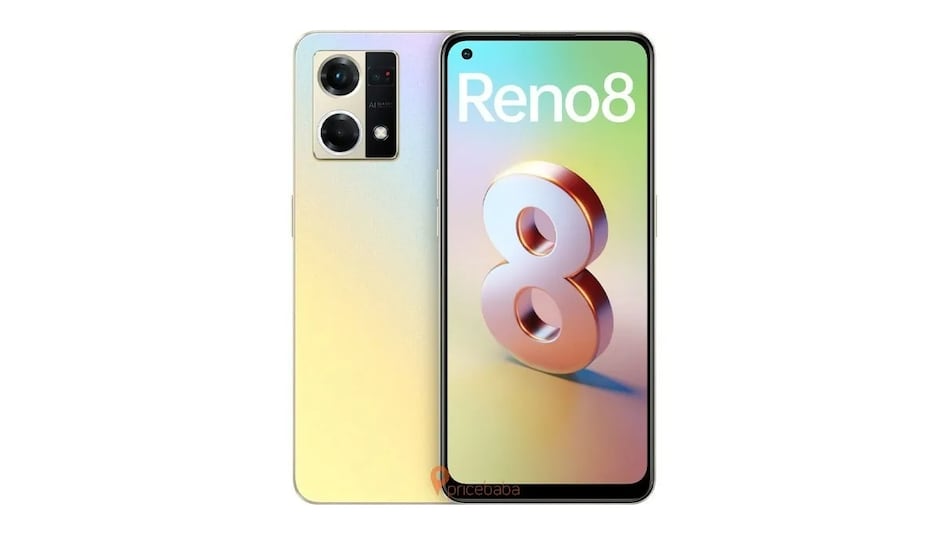 Oppo recently launched the Reno 8 series in India in July that included the vanilla Oppo Reno 8 5G and Oppo Reno 8 Pro 5G handsets. These handsets are powered by MediaTek Dimensity 5G chipsets and feature a 50-megapixel primary rear camera. The Chinese tech giant is now reportedly gearing up to bring a 4G variant of the regular Oppo Reno 8 model. This rumoured smartphone could reportedly pack an octa-core Qualcomm Snapdragon 680 SoC. There could also be a 64-megapixel primary rear camera.

A report by Pricebaba in collaboration with tipster Paras Guglani (@passionategeekz) has revealed the alleged specifications of the Oppo Reno 8 4G. This rumoured Oppo smartphone is said to offer two colour options — Dawnlight Gold and Black.

It is depicted to sport a front panel with the hole-punch slot on the top left corner similar to the already-released Reno 8 and Reno 8 Pro 5G smartphones. However, the rear panel appears to resemble the design of the Oppo Reno 7 4G, which was launched in March this year.

The Oppo Reno 8 4G reportedly could be powered by an octa-core Snapdragon 680 SoC coupled with 12GB RAM and 256GB onboard storage. It is expected to pack a 4,500mAh battery with support for 33W fast charging. This smartphone is said to sport a triple rear camera setup headlined by a 64-megapixel primary camera along with two 2-megapixel secondary sensors. The Reno 8 4G is likely to feature a 32-megapixel selfie camera.

This rumoured smartphone purportedly bears resemblance to the Oppo Reno 7 4G, which has a 6.43-inch display with a refresh rate of 90Hz. In addition, the display is shielded by Gorilla Glass protection. The Reno 7 4G measures 159.90x73.20x7.49mm and weighs about 175g. This dual-SIM smartphone supports Wi-Fi, Bluetooth v5.1, and NFC connectivity. It also sports a USB Type-C port and 3.5mm headphone jack.