Oppo Reno 5 is expected to come with a flat display while the other two variants in the series are expected to have curved displays. 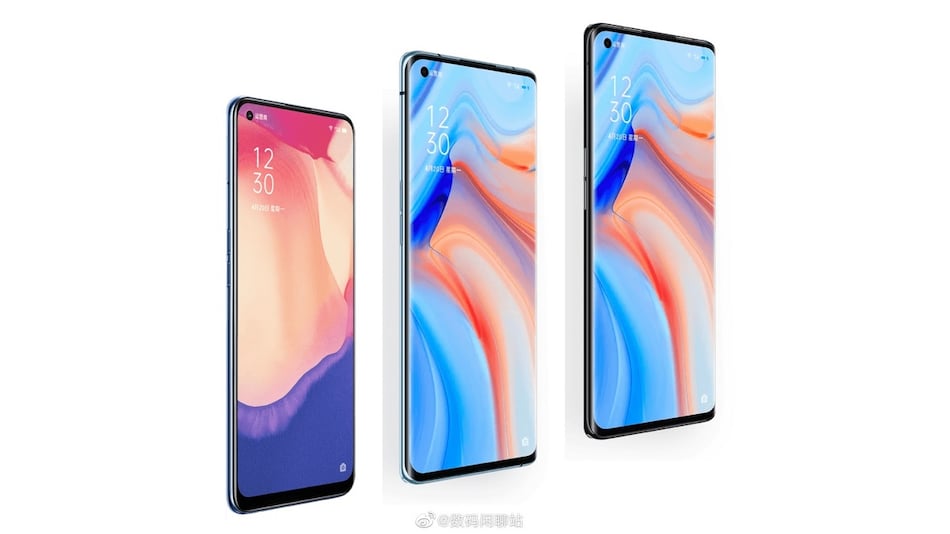 On the Weibo post shared by Oppo, the company states that the Oppo “Star Diamond Rejuvenation series” will debut on December 10. While it does not explicitly mention the Reno 5 series, the rumour mill suggests that Oppo may announce the purported smartphones on the date. There is a short clip with the post as well that also does not confirm if the company is referring to the Oppo Reno 5 series.

Known tipster Digital Chat Station (translated) shared an image on Weibo, showing the three rumoured Oppo Reno 5 phones with their front panels. Two of the phones have curved displays while the third has a flat display. Presumably, the Pro and Pro Plus models will come with a curved display while the vanilla Oppo Reno 5 will come with a flat display. All three phones have a hole-punch cutout for the selfie camera, located at the top-left side of screen. Oppo Reno 5 seems to have a relatively thicker chin as well.

Another tipster with username Sanyi Life (translated) shared an image of the back of Oppo Reno 5 on Weibo, along with a couple of specifications. The phone can be seen with a quad rear camera setup with three sensors aligned vertically. The phone features Oppo branding as well as ‘Reno Glow' branding on the back panel. The tipster adds that the phone will be powered by the Qualcomm Snapdragon 765 5G processor and support a maximum of 65W fast charging.

Oppo Reno 5 is expected to feature a 6.43-ich full-HD display with 90Hz refresh rate. It may come with a triple rear camera setup that includes a 64-megapixel primary sensor, an 8-megapixel secondary sensor, and two 2-megapixel sensors. It could be backed by a 4,300mAh battery. On the other hand, Oppo Reno 5 Pro may feature a 6.55-inch display, the same camera configuration as the Reno 5, and a 4,350mAh battery. The phone is expected to be powered by the MediaTek Dimensity 1000+ SoC.

Oppo Reno 5 Pro Plus is expected to feature the same display size as the Pro variant. In terms of optics, it may come with a quad rear camera setup that includes a 50-megapixel primary sensor, a 16-megapixel secondary sensor, a 12-megapixel tertiary sensor, and a 2-megapixel quaternary sensor. The Pro Plus variant could be powered by the Snapdragon 865 SoC and come with a 4,500mAh battery.