Oppo Reno 3 Pro specifications could include a quad rear camera setup and 128GB of onboard storage. 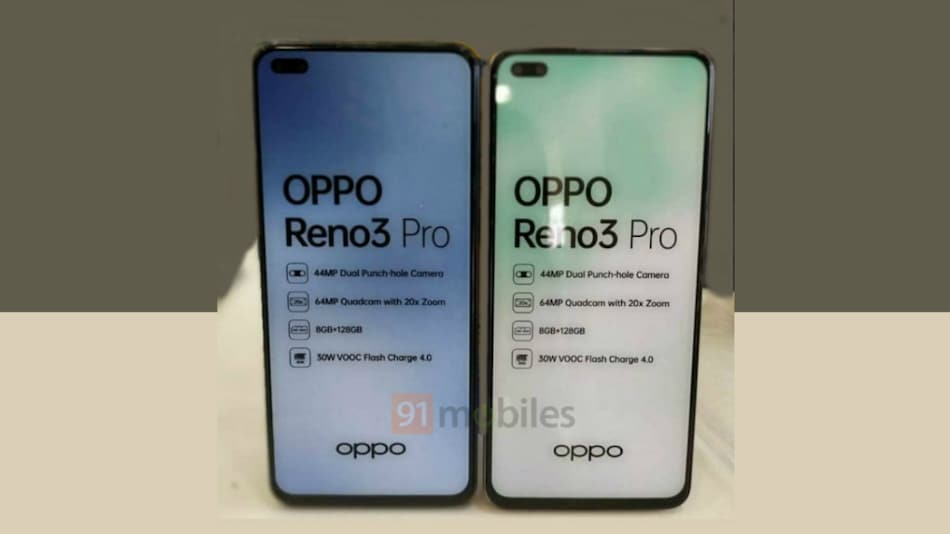 Oppo Reno 3 Pro, the latest flagship smartphone of the Chinese company that is set to debut soon, has been spotted in a retail store in India, according to a media report. The new development comes just days after Oppo officially announced that the India version of the Reno 3 Pro in the works. The new model is expected to have some significant changes over the Oppo Reno 3 Pro that was launched in China late last year. One of the key differences is the presence of a dual hole-punch selfie camera that is unlike the single selfie camera available on the China model of the Reno 3 Pro.

The India version of the Oppo Reno 3 Pro has been spotted on display in a retail store in the country, reports 91Mobiles. An image has also been shared online to showcase the design of the new Oppo phone. The image features the smartphone along with a screen protector suggesting its key specifications. Also, it highlights the pill-shaped dual hole-punch selfie camera that we saw on the Reno 3 Pro earlier this week. The selfie camera setup is already confirmed to have a 44-megapixel primary sensor.

If we believe what has been revealed through the leaked image, the Oppo Reno 3 Pro in India will have a quad rear camera setup with a 64-megapixel primary sensor and 20x zoom. The smartphone also appears to have 8GB of RAM and 128GB of onboard storage as well as 30W VOOC Flash Charge 4.0 fast charging technology.

Oppo Vice President and India R&D Head Tasleem Arif through a tweet recently revealed that the Reno 3 Pro in India will come with 4G specifications. This means that there would be a list of changes over the 5G-supported Reno 3 Pro that was launched in China in December. Amazon and Flipkart also have dedicated microsites to suggest online availability of the new smartphone.

The Oppo Reno 3 Pro launch in India is set for March 2. In the meantime, we can safely expect some teasers and leaks suggesting what we would receive in the country early next month.

iPhone XS, Samsung Galaxy A50, Pixel 3a, Asus 6Z, Others to Get Discounts During Flipkart Mobiles Bonanza Sale
Hacker Creates a Device That Can Unlock Any Luxury Car