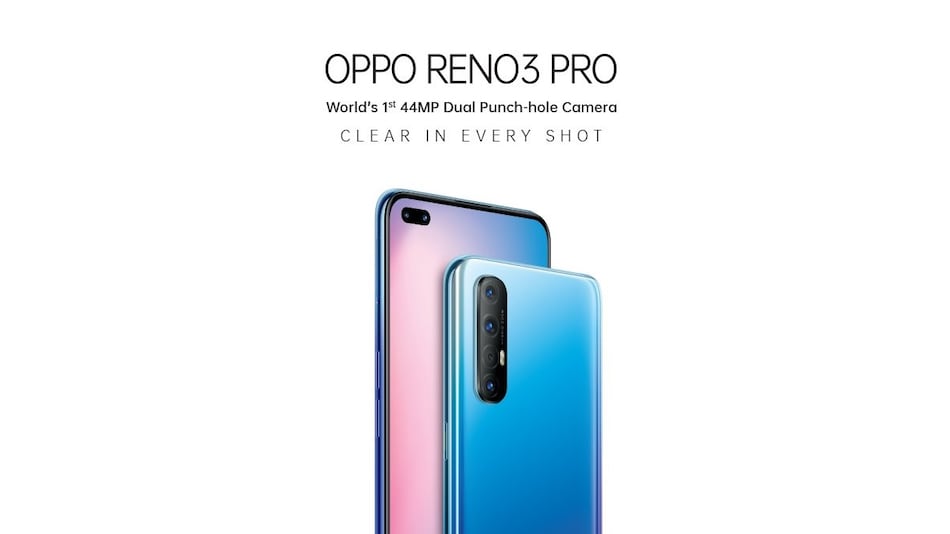 Oppo Reno 3 Pro is all set to launch in India today and it is touted to be the first smartphone to sport a 44-megapixel dual selfie camera. Teasers reveal that the phone has two cutouts for selfie cameras in the front, and a quad camera setup at the back. The Oppo Reno 3 Pro India variant is going to be different than the China variant that was launched last year. For instance, the main rear camera at the back will include a 64-megapixel main shooter, and not a 48-megapixel camera, seen on the China model. A whole lot of features have been teased by the company ahead of official launch, and a few details have also leaked online. Here's a comprehensive low down on all the things you need to know about the Oppo Reno 3 Pro ahead of its launch today.

According to the Chinese smartphone maker, it is hosting a press event in New Delhi to unveil the new phone. The event will begin at 12.30pm IST, and Oppo will most likely stream the event live via its YouTube and other social channels. The company's official launch live stream isn't live yet and we will update this copy as soon as it is available.

Oppo Reno 3 Pro price in India hasn't been announced as of yet, but the company could price it somewhere around the China pricing of the phone. To recall, the Oppo Reno 3 Pro is priced at CNY 3,999 (roughly Rs. 40,000) for the 8GB + 128GB model in China, while the top-end 12GB + 256GB configuration costs CNY 4,499 (roughly Rs. 45,000). The phone is slated to go on sale via Amazon, Flipkart, and offline stores as well. The Oppo Reno 3 Pro is also teased to come to India in Aurora Blue, Midnight Black, and Sky White colour options at launch.

As per official renders shared by Oppo, the Reno 3 Pro is seen to sport a dual hole-punch selfie camera setup with the cutouts placed on the top left of the screen. The quad rear camera setup is placed on the upper left corner of the back panel, and the sensors are all aligned vertically. The phone is expected to carry an in-display fingerprint sensor, and the India variant will be 4G-only. The teasers also reveal that the quad camera setup at the back will have a 64-megapixel main camera, a 13-megapixel telephoto shooter, an 8-megapixel ultra-wide-angle camera, and a 2-megapixel monochrome shooter. Up front, there will be a 44-megapixel main selfie shooter and a 2-megapixel depth sensor. The Oppo Reno 3 Pro is also listed to offer 'Ultra Night Selfie Mode' that essentially takes multiple shots to create an ideal image.

Other specifications are not known at the moment, but Oppo should make all things official later today.