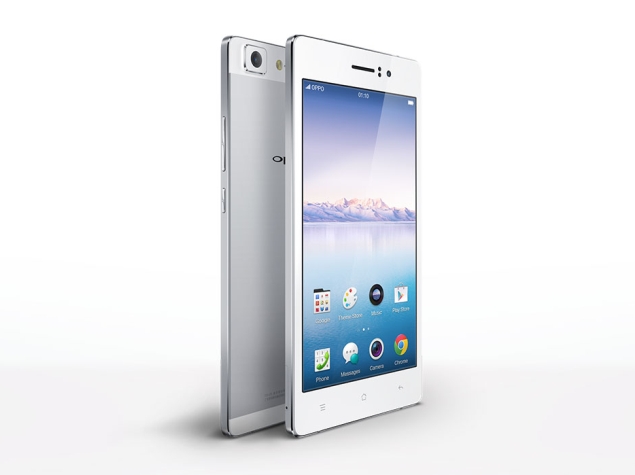 Oppo's slimmest smartphone, the Oppo R5, which went up for pre-orders in India on January 1, is now available to purchase via major retail stores across the country at Rs. 29,990.

With a thickness of a mere 4.85mm, the Oppo R5 was the 'slimmest smartphone in the world' until the recent launch of Vivo X5Max, which is just 4.75mm thick. The smartphone features metallic and ceramic finishes at the corners.

The R5 features a 13-megapixel rear camera with Sony IMX214 sensor; f/2.0 aperture, and a LED flash. There is a 5-megapixel front-facing camera also onboard. Running the company's proprietary ColorOS 2.0.1 (based on Android 4.4 KitKat), it supports a single Micro-SIM and comes with 16GB of inbuilt storage which is non-expandable.

There is 2000mAh battery onboard, and the smartphone supports VOOC charging technology that is said to charge the battery from 0 to 75 percent in around 30 minutes. Connectivity options on the smartphone include Wi-Fi, Bluetooth, GPRS/ EDGE, TD LTE, LTE FDD, and Micro-USB. Notably, there is no 3.5mm audio jack onboard, and customers will have to use the bundled Micro-USB to 3.5mm audio jack adapter, or the wireless O-Music accessory. The Oppo R5 measures 148.9x74.5x4.85mm and weighs 155 grams.

Earlier this week, Oppo launched two new smartphones, the Oppo Mirror 3 and the Oppo R1C, in Vietnam and China respectively. Details of availability in other markets has not yet been revealed.

Lenovo A6000 With 4G LTE Support, 64-Bit SoC Launched at Rs. 6,999
Need Some Espionage Done? Hackers Are for Hire Online