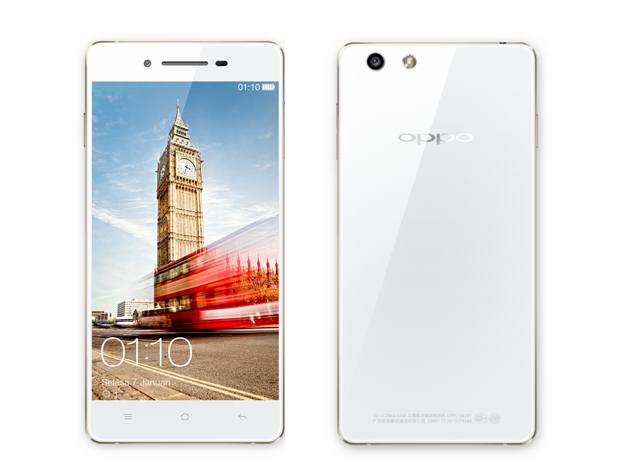 Chinese manufacturer Oppo has launched the Oppo R1 for the Indian market at Rs. 26,990.

The Oppo R1 is a dual-SIM smartphone that runs on Android 4.2 Jelly Bean with the company's custom skin, ColorOS, on top of it. It features a 5-inch 720x1280 pixel resolution display with Corning Gorilla Glass 3 protection and a pixel density of 294ppi.

It packs a 1.3GHz quad-core MediaTek MT6582 processor and a Mali 400 GPU clubbed with 1GB of RAM. The Oppo R1 smartphone sports an 8-megapixel rear camera with LED flash and BSI sensor, while there is a 5-megapixel front-facing camera also onboard with a 80-degree wide-angle lens.

The smartphone comes with 16GB of inbuilt storage, while there is no expandable storage support. The R1 supports Bluetooth, Wi-Fi, Wi-Fi Direct, GPRS/ EDGE, HSPA, GPS/ A-GPS, and 3G connectivity options. The Oppo R1 is backed by a 2410mAh battery, measures 142.7x70.4x7.1mm and weighs 141 grams.

The Oppo R1S features a similar 5-inch display with a 720x1280 pixel resolution and offers a pixel density of 294ppi. It features a quad-core Qualcomm Snapdragon 400 SoC clocked at 1.6GHz, coupled with the Adreno 305 GPU and 1GB of RAM.

The new R1S smartphone sports a 13-megapixel rear camera with LED flash and CMOS sensor, while there is a 5-megapixel front-facing camera also onboard. The smartphone comes with 16GB of inbuilt storage, while there is no word on expandable storage support. The R1S supports Bluetooth, Wi-Fi, GPS/A-GPS, GPRS/EDGE, LTE and 3G connectivity options.

Apple iWatch already in production ahead of September launch: Report
Narendra Modi's selfie stirs up yet another controversy