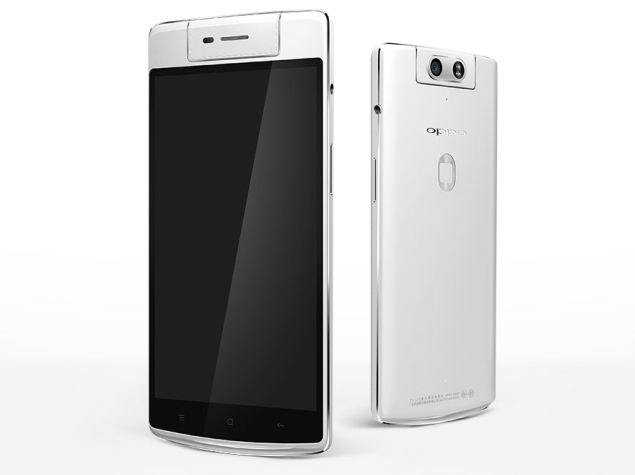 Oppo has launched the N3 in India. The Oppo N3 has been priced at Rs. 42,990, and the firm says it is available at major stores across the country.

The smartphone was first unveiled back in October. The Oppo N3's highlight is its motorised swivel camera that can track objects as they move, and can rotate up to 206 degrees. The camera features 16-megapixel 1/2.3-inch sensor with a pixel size of 1.34 micrometres. Oppo says the camera can shoot panoramas in up to 64-megapixels, also flaunts a Schneider Kreuznach-certified lens with five optical lenses, apart from an LED flash and f/2.2 aperture.

Some of the other camera functions that come under the Oppo N3's "Ultra image 2.0" suite include slow shutter, ultra macro mode after focus, and shooting in RAW.

The N3 also features a fingerprint sensor on its back panel that can perform several functions, one of them being protecting images with fingerprint authentication with a single swipe after shooting an image.

Backed by a 3000mAh battery, the N3 includes 4G LTE, Bluetooth 4.0, GPS/ A-GPS, Wi-Fi 802.11 b/g/n and USB 2.0 connectivity options. The handset's battery comes with company's own VOOC rapid charging technology, which Oppo claims can recharge the N3 from 0 percent to 75 percent in 30 minutes. The handset features a notification light below the screen, like seen on the Oppo Find 7, with new Notification 2.0 software. It measures 161.2x77x9.9mm and weighs 192 grams.