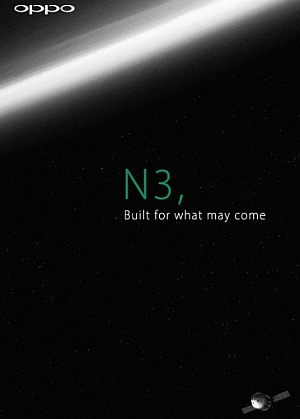 Oppo has once again teased its upcoming N3 smartphone via a new image on its Weibo account. Notably, the Chinese smartphone maker teased the N3 smartphone earlier this month in a few images.

The new teaser is an image of outer space, with stars in the background and a planet on the top end, a satellite towards the bottom, and a line in the middle that states "N3, Built for what may come."

While the image fail to reveal any specifications of the N3 smartphone, its Weibo caption does indicate the device to boast an 'aerospace grade material' build. While this can include any material ranging from steel to titanium, it is probable that the Chinese smartphone maker would use a non-expensive alloy to ensure a balance between weight and durability.

The Oppo N3 is also being reported to house a new cooling system (seen below) using a special material. As per G for Games website, the special material covers the vital components of the Oppo N3 and accelerates heat conduction whenever the temperature rises. The full details of how the system works were not provided.

Besides a new cooling system, a new cylindrical-style swivel camera module may also be boasted by the N3. As per the recent leaked press image, the central portion of the top cylinder appears to be able to rotate, and features what look like speakers on either end. The report didn't include any specifications for the alleged Oppo N3, but had noted that the new phablet will be far slimmer than its predecessor.

Contradicting the cylindrical swivel camera leak, another leaked image made its way to the Web shortly after, with a design more consistent with the Oppo N1 and its rectangular rotating camera.

The Oppo N3 is set to get officially launched on October 29, as per the invites sent by the handset maker last week.